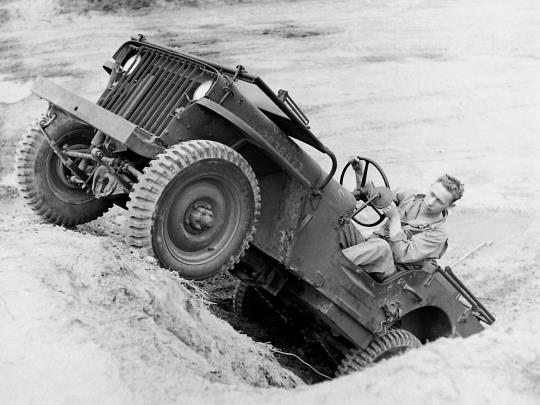 For decades, the collector’s car market favored exclusive sports cars, limited production models, and pre-war antiques but back in 2014, a perfectly restored 1977 Toyota FJ 40 was sold for $101,000! It was quite a shock, and it showed that modern collectors consider old off-roaders valuable and collectible, not just relics of the pre-soft SUV era. All of a sudden, fashion-savvy bloggers, influencers, and celebrities all started buying classic SUVs, and the market exploded. That is why the mint 1966 Bronco costs more than the upcoming 2021 model.

But, this is much more than just another trend, and those classic off-road survivors really deserve to be preserved and cherished by car enthusiasts. With their rugged charm, chrome bumpers, rumbling V8s and macho swagger, classic off-roaders are perfect personification of times when everybody smoked cigarettes, gas was 15 cents a gallon, and Steve McQueen was the Hollywood’s biggest movie star.

No list of classic off-roaders wouldn’t be complete without the iconic Jeep Willys. First mass-produced 4×4 in the world, the epitome of a military vehicle and one of the essential Allied weapons in Second World War, this little Jeep helped beat the Nazis and create the world as we know it today. No chrome bumpers or two-tone paint here, just military-spec olive green. Even though it had a 2.3-liter four-cylinder with around 60 hp, it was magnificently capable off-road.

Today mostly known for their lineup of trucks and semis, International Harvester made off-roaders back in the day. One of their best-known models was a compact SUV called Scout. Introduced in 1961 and sold through 1980, Scout was a small, tough and versatile vehicle offered with a wide range of engines, options, and with or without removable top. Designed as a competitor to Jeep CJ-5, it was arguably better built and more usable.

Bronco wasn’t the first compact off-roader but very soon proved to be most successful. Introduced in 1966, it was offered in three body styles, permanent and four-wheel-drive and venerable 289 V8 with 200 hp. It is a true definition of a utilitarian off-road vehicle, capable of serving as a beach truck in Malibu as well as border patrol cruiser in New Mexico. Besides being one of the defining models in its class, Bronco was also successful in racing, winning the infamous Baja 1000 race four times. And of course you can get a new Bronco now if you like.

In 1962, Jeep presented the Wagoneer and created one of the most influential vehicles ever made. It was the first real SUV model which successfully combined the comfort and ride quality of passenger car with world-class off-road abilities or a real Jeep. All of a sudden, going off-road didn’t mean being exposed to the elements and freezing behind the wheel of an open CJ-5. Wagoneer offered enormous interior space, big trunk, heater and A/C, woodgrain side panels, and much more. It was a Cadillac of Jeeps if you will.

As usual, GM overlooked the rising off-road market, and by the late ’60s, they were caught off guard by Jeep, International, and Ford’s success. So, they had to figure something fast. Using shortened truck chassis, standard V8 engines, and tough four-wheel-drive systems, Chevrolet created the Blazer in 1969. It was bigger than the competitors but also more usable and practical. The first generation lasted until 1973, but the second-gen model met global success and was sold until 1991.

Some might say that Dodge was late for the party, but when the Ramcharger was introduced in 1974, it proved to be a very competitive and successful off-road model. Dodge copied Chevrolet’s recipe and used shortened truck chassis but offered more engine options starting with the classic 225 Slant Six. However, the mighty 440 V8 was also available as the top engine option. With a lower price and tough mechanics, Ramcharger was popular amongst the buyers and stayed in production until 1993.