Australia Travel Brochure: Where to Spend Your Time 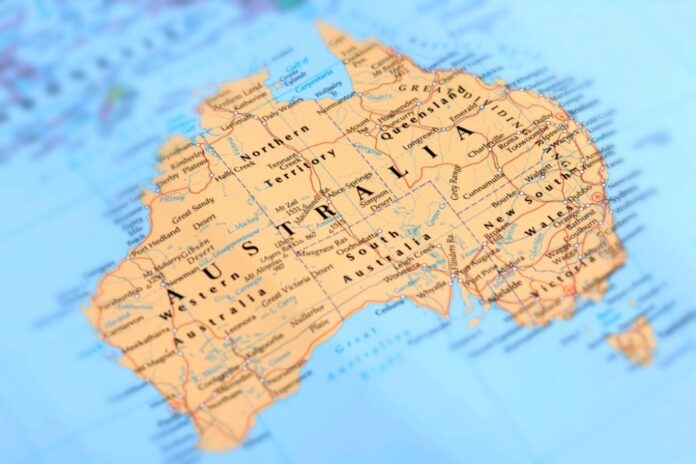 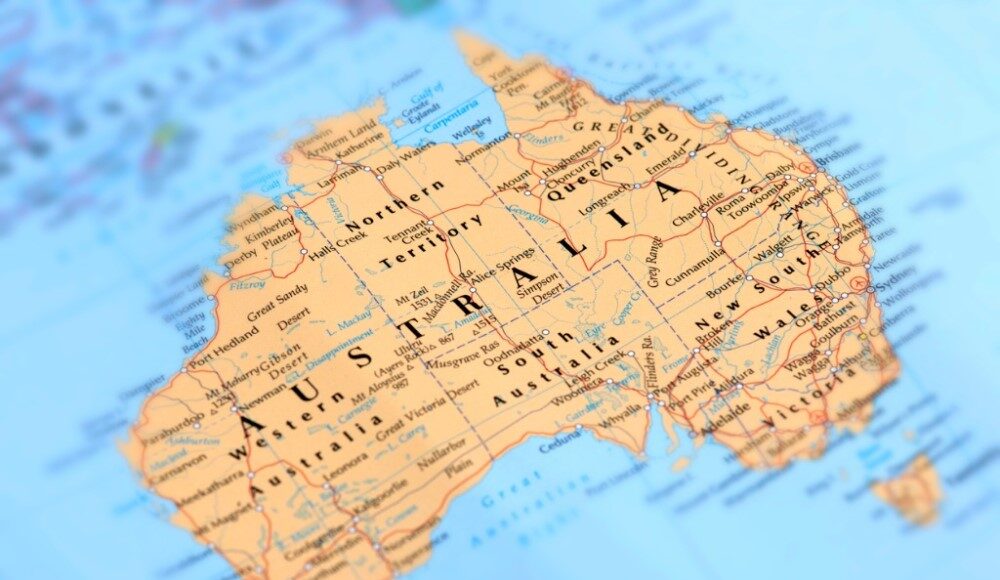 photo by omersukrugoksu via iStock

Australia is another one of those epic locations we can find on just about anyone’s travel bucket list. Especially for those who love the endless rugged terrain and exploring the wilderness.

Four-wheel driving has become a real folk sport in Australia over the years. The Aussies are not exactly scared and like to test their vehicles, including their off-road 4×4 campers. So it is a fantastic place for overlanding.

Australia is blessed with many gravel and unpaved roads that lead to beautiful and often deserted places. With a 4×4 vehicle, anyone can seek out adventure. Although, a 4×4 is not always necessary, Eastern Australia is easily accessible with a 2WD car or an Australia travel trailer.

In Western Australia, Northern Territory and South Australia, a 4WD is desirable to visit all the highlights because only a 4×4 gives access to the often rugged terrain to reach those secluded locations.

In this Australia travel brochure, we’ll take you through Australia’s most beautiful locations, let you know where to spend your time in Australia, and discuss the country’s rules on overlanding.

For This One, Take Your Time 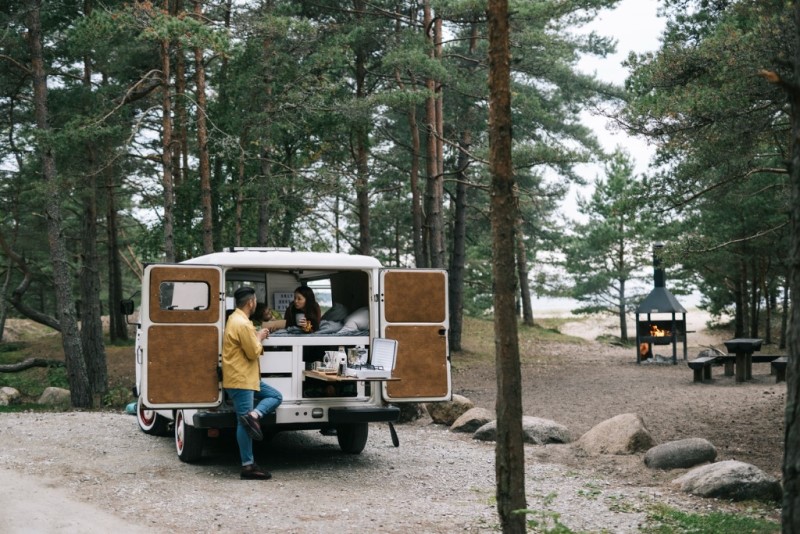 photo by visualspace via iStock

Australia is a vast country, so this Australia travel brochure can’t hit on everything you need to see. For example, plan at least 28 to 30 days for the Perth-Darwin route. Of course, you can complete the long way by 4WD camper in a shorter period, but if you want to maintain a relaxed travel pace, visit all the locations this route has to offer.

Keep in mind that you will move slowly along these dirt roads as you would on asphalt. If a trip is planned for around 20 days, due to lack of time, places such as Kooljaman, the Mitchell Falls, the Mornington Wilderness Camp and parts of Kakadu NP have to be passed over.

It would be a shame if you had to skip these parts, so if you plan an overlanding trip to Australia, make sure to clear your schedule and give the country the time it deserves. 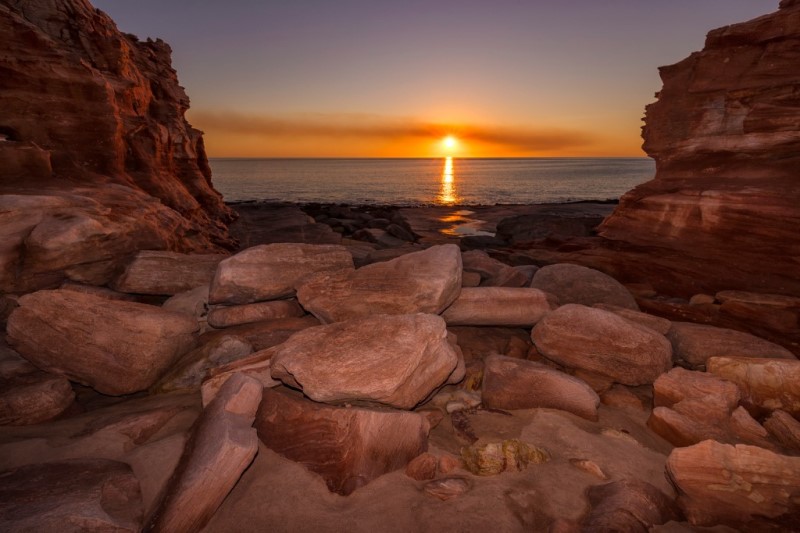 photo by Greg Sullavan via iStock

Sidenote: This campsite unexpectedly closed because of Covid on November first 2021, and it is unclear when the site will reopen. But the site should be open for visitors in 2022.

Kooljaman is a luxury resort as a wilderness camp and one of the most secluded and beautiful resorts found in “down under”. Kooljaman resort harnesses the charm of nature and the beautiful beaches and blends in with the scenery without spoiling it.

The beaches around Kooljaman, Cape Leveque, are safe to swim in all year round as they are free of jellyfish and crocodiles. That may sound like a given, but these animals are often a problem at Australian beaches.

There are occasional crocodile sightings at the beaches, and while they do not pose a threat, travelers often panic because of this. For this reason, if a crocodile is sighted, the staff usually closes down the beach temporarily. You can even see migrating humpback whales that pass these beaches at viewing distances between July and October. 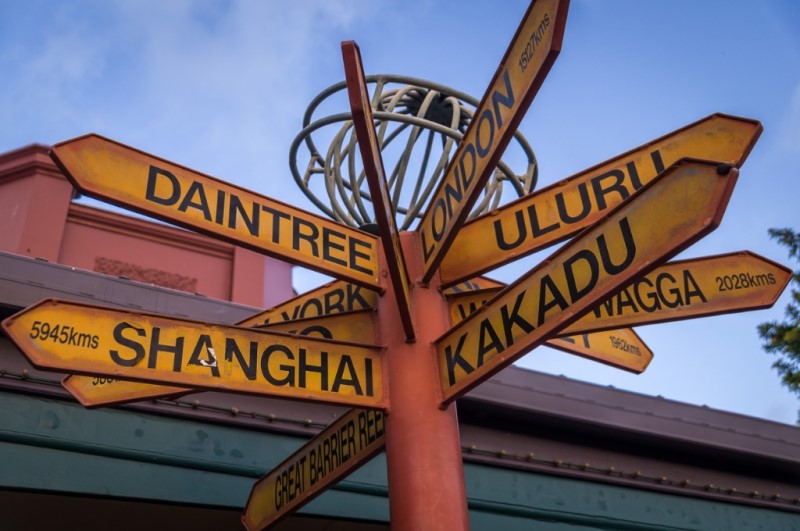 photo by julianpetersphotography via iStock

Australia’s largest national park is located in the country’s rugged north. Kakadu National Park is a World Heritage Site because of its diverse landscapes and Aboriginal cultural heritage. The Bininj and Mungguy tribes have lived here in the shadow of the great Alligator River for 65,000 years, making it one of the oldest cultures in the world.

The next stop in our Australia travel brochure is Ubirr for the thousands of years old rock art. You can also learn about the arrival of the Europeans through the eyes of the locals. The first thing to know is that ‘goodbye’ in the local language is ‘bobo’, pronounced ‘bor bor’. Be sure to say this when you leave and say goodbye to the Ubirr. This gesture is much appreciated and shows respect for their culture. 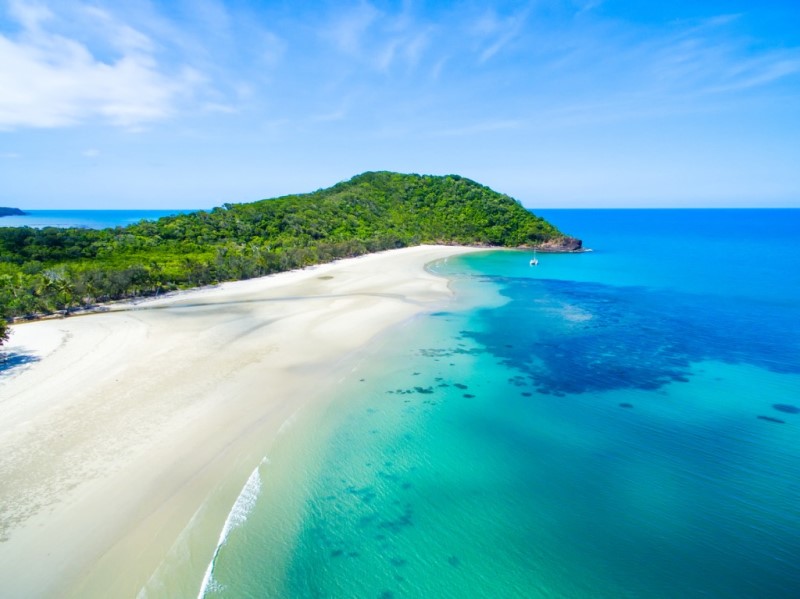 photo by DarrenTierney via iStock

Daintree National Park is a unique piece of nature on the northeast coast of Australia. Not only is this the largest rainforest in the country, but it is also one of the oldest in the world. A favorite in this park is Cape Tribulation, one of the few places in the world where the ocean and rainforest merge. This is where you can stand with your feet on the white beach, enjoy the view of the ocean, the sounds of the rainforest and the sound of the waves.

The Disappearing Apostles Along the Great Ocean Road 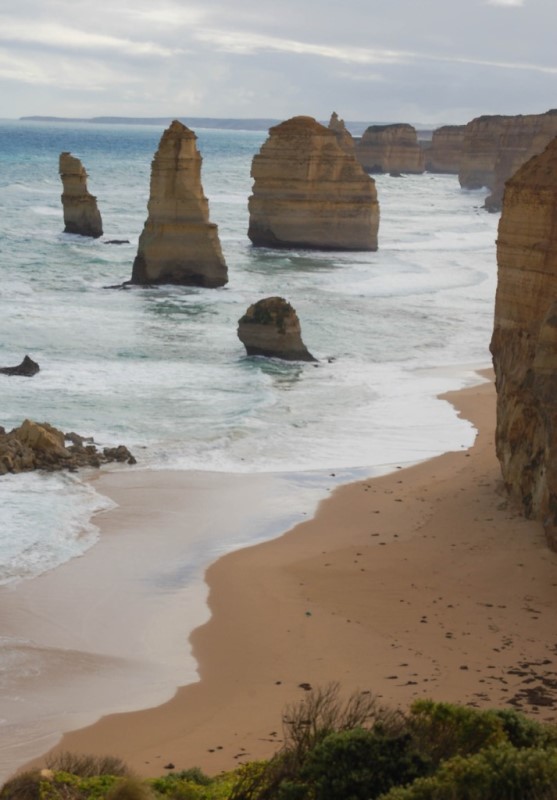 photo by VargaJones via iStock

One of Australia’s most popular driving routes is the Great Ocean Road, and no Australia travel brochure is complete without it.

This route starts in Torquay and leads you past remarkable natural phenomena and the most beautiful stretches of coast in the country, such as Bells Beach. The start of the 150-mile route feels like a race because of the wooden beams that hang over the road with the ‘Great Ocean Road’ sign.

The main attraction of the route is the Twelve Apostles. These limestone rock formations tower 50 meters above the sea. Despite the name suggesting that you will see twelve rocks, there are only eight. There were nine at some point in history, but one has collapsed due to years of erosion, but there have never been twelve. Don’t forget to watch the golden beach shimmer in the light of the setting sun and be amazed by the breathtaking view of the ocean.

Australia Travel Brochure: Uluru – The Sacred Rock of the Aborigines 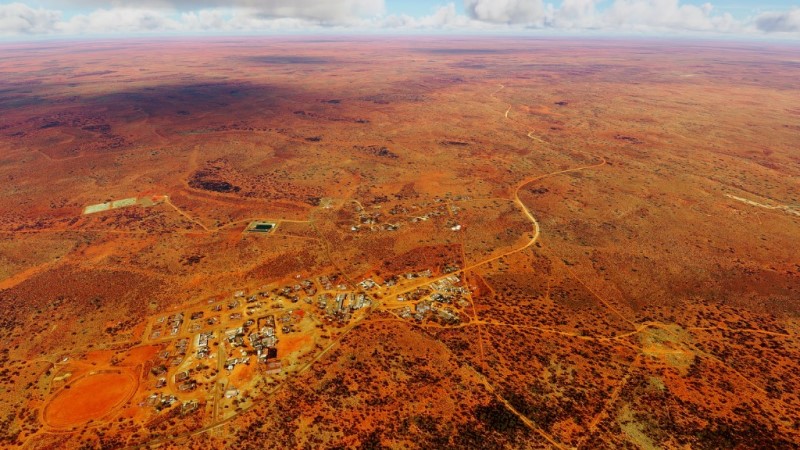 photo by Vonkara1 via iStock

The great red-colored Uluru – a large rock in the Aboriginal language – is the heart and symbol of Australia. The largest monolith in the world towers over 300 meters above the surrounding desert and is sacred ground for the Aboriginals. For them, Uluru symbolizes a solid connection to their ancestral spirits, who they believe in having created this landscape.

Since 2019, you are no longer allowed to climb this unique rock out of respect for the Aboriginal culture and the preservation of the monolith. So, for now, walk one of the many trails around Uluru and see the red colors that sparkle during sunrise or sunset.

Always wanted to sleep under the stars? Then camp on one of the camping sites around the rock and be enchanted by the clear starry sky by the crackling campfire. Your Australia travel brochure must have this experience included! 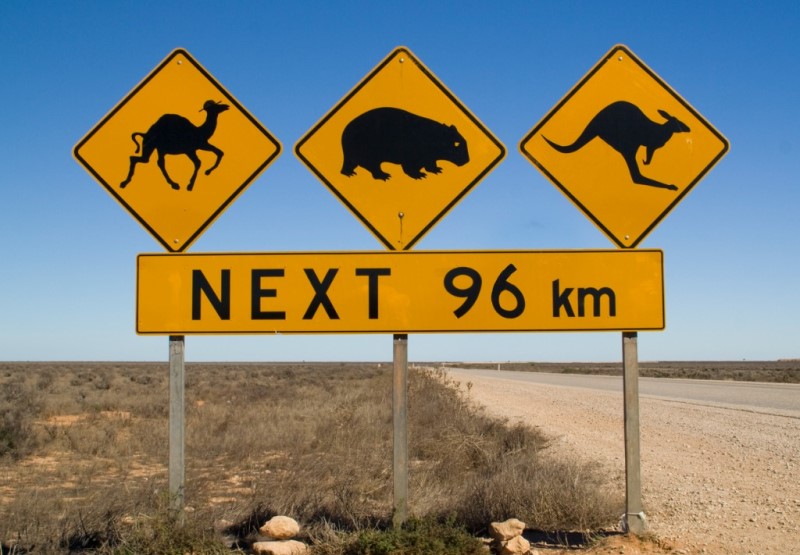 photo by Yoav Peled via iStock

One of the first things you should know in our little Australia travel brochure is that you’re still going to need a visa if you even plan a trip shorter than three months. These visas are free of charge, but you need to fill in the paperwork in advance. So keep that in mind. If you plan to stay longer than three months, you must apply for an ETA visa. An ETA goes up to 12 months. So, if you’re wondering, “Do us citizens need a visa to travel to Australia?” the answer is yes.

Some parts of Australia require a permit to drive through with a 4×4 vehicle, for example, to travel through Aboriginal land. Unfortunately, this is not yet centrally regulated, and the different states have different ways to apply this. However, you can easily research the park-specific Australian permits via the Exploroz website. It will refer you to the proper authority. 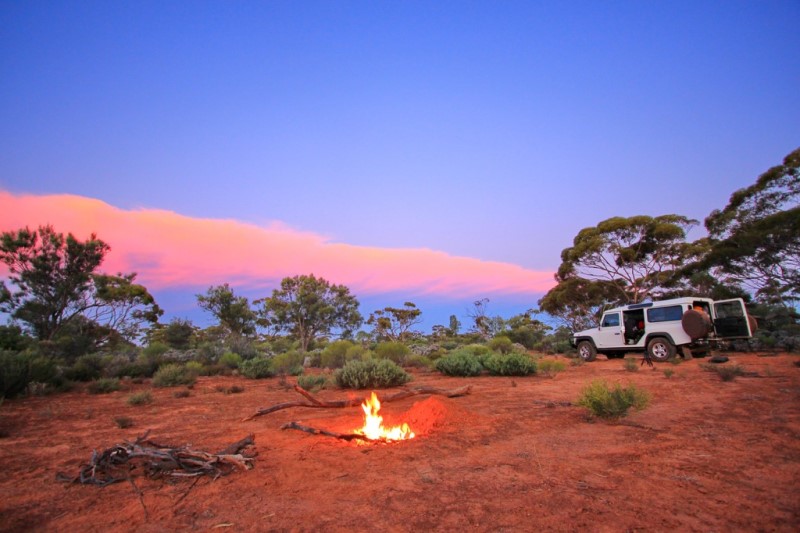 photo by Totajla via iStock

Wildcamping is officially not permitted in Australia, but a vast network of camping spaces is available, and even national parks allow camping in designated areas. So it is not hard to find a breathtakingly beautiful spot to park your 4×4 vehicle for the night legally.

Wikicamps is an excellent app to help you find and filter through potential locations to spend the night. You can even filter for areas that include crocodiles if that’s your gig. Or places where you can empty your black and grey water tanks or access freshwater. It also doubles as an offline GPS.

With that, you have a quick Australia travel brochure to help you plan an epic trip down under!