Where to Spend Your Time in Iceland 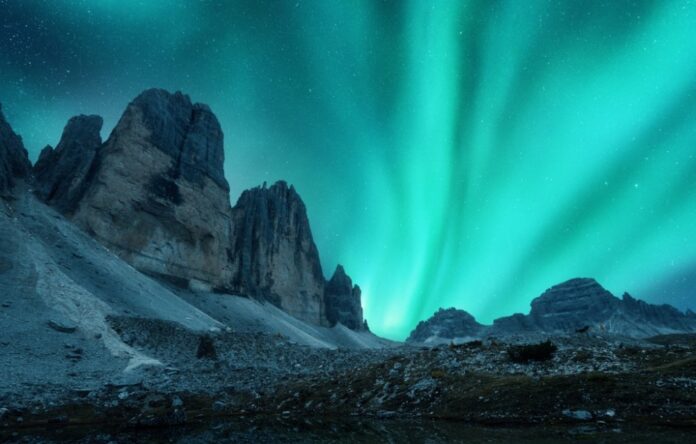 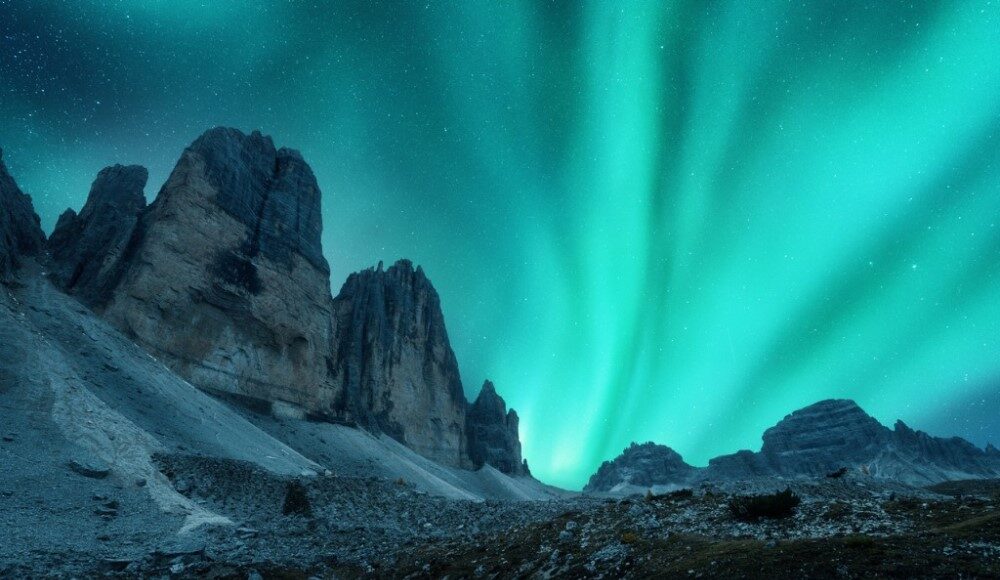 photo by den-belitsky via iStock

Many of us have dreamed of going to Iceland and social media has been flooded in the past years with images from the amazing sceneries this country has to offer for all naturalists and hikers. But you don’t often see the deserted inland of Sprengisandur where a four-wheel-drive is necessary to maneuver the terrain.

Can you imagine waking up in your rooftop tent, having your morning coffee with the beautiful scenery of the Westlands? Followed by a dip in one of the eight geothermal lakes and baths in Iceland before venturing off-road passing waterfalls, mountains and possibly even a volcano before setting up camp and ending the night under the dancing northern lights. An adventure that causes any outdoor lover’s heart to skip a beat.

We’ll take you through Iceland’s most beautiful locations, let you know where to spend your time in Iceland, and discuss the country’s rules on overlanding.

The Golden Circle and Reykjavík

photo by Drazen Lovric via iStock

The Golden Circle is a 300km round trip that departs in Iceland’s capital Reykjavík and passes three main stops along its popular route: þingvellir National Park, the Gullfoss Waterfall and the valley of Haukadalur where the two geothermal geysers – Geysir and Strokkur – can be found. It is a prime area to spend your time in Iceland.

Reykjavík itself is Iceland’s capital and its largest city with around 200,000 inhabitants. There are a couple of suggestions we would make for when visiting Reykjavík. The city’s old harbor is riddled with cozy restaurants and picturesque alleys filled with old renovated fishermen’s houses. You’ll also find the Viking Maritime Museum in the harbor and Reykjavík’s whale tours also depart from here.

Skaftafell National Park is Well Worth Your Time in Iceland 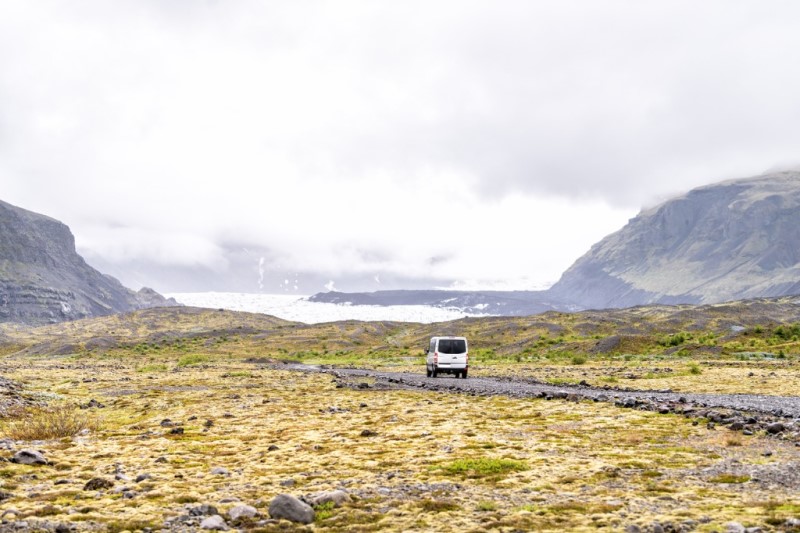 photo by ablokhin via iStock

Skaftafell is located on the south coast of Iceland between the towns of Kirkjubæjarklaustur and Höfn. The area has been part of Vatnajökull National Park since 2008.

The eruptions of the volcanoes have shaped the landscape here and the Öræfajökull glacier and Vatnajökull is the largest glacier in Iceland. The Mörsárdalur valley, Kristinartindar mountain, Svartifoss waterfall and Skaftafellsjökull glacier can be seen in this park. 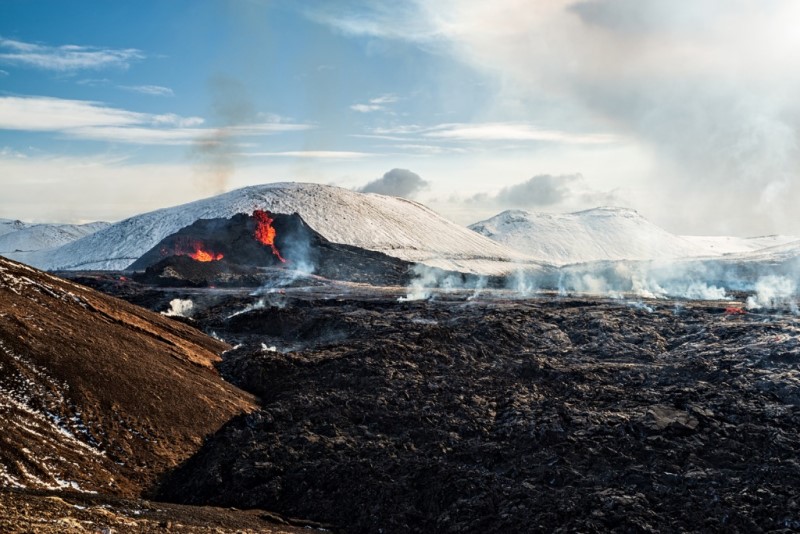 photo by LuigiMorbidelli via iStock

This is the volcano that has recently drawn much attention and has been plastered all over social media with people visiting it.

Its eruption started in March and lasted until halfway through September, but scientists believe it is too early to define whether the eruption has ended, or simply paused. This volcano is part of the Reykjanes UNESCO Global Geopark.

Ystafell Transportation Museum is Worth Your Time in Iceland Too

Somewhere in the middle of all that wilderness is an amazing museum that is a must-see for any car enthusiast that finds himself in Iceland. This museum is filled with classic cars and other vintage rarities like Iceland’s first camper which is more of a trailer with a wagon cover on it. And Iceland’s oldest vehicle and wheels, a 1914 model T. 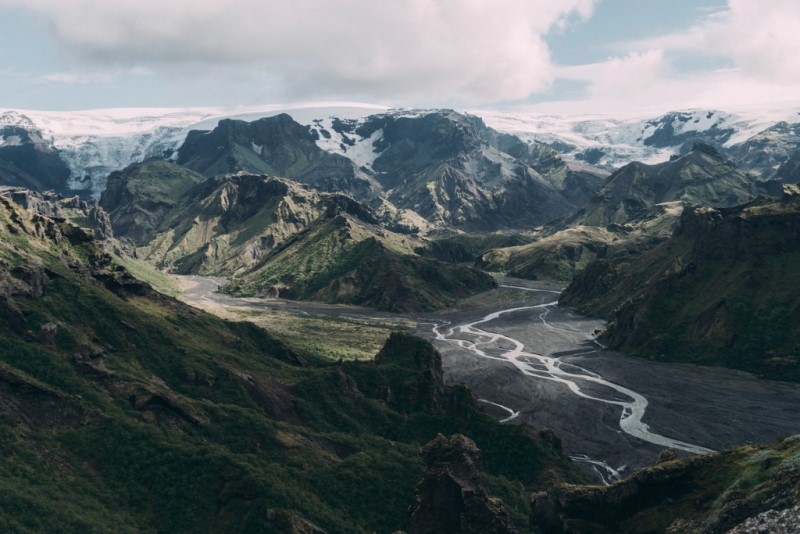 photo by Oleh_Slobodeniuk via iStock

This wild valley whose name translates to ‘The woods of Thor’ in the southern region of Iceland is known for its many water crossings, some of these can be challenging to maneuver and are all well worth the thrill and beautiful scenery.

This area has its own microclimate, causing it to be warmer than the surrounding areas. The Thormsörk can be reached by road F249, a 30-kilometer long road that traverses several small rivers at the foot of the glacier tongue Gígjökull.

Black Lava Beaches: Spend Your Time in Iceland on the Black Sand 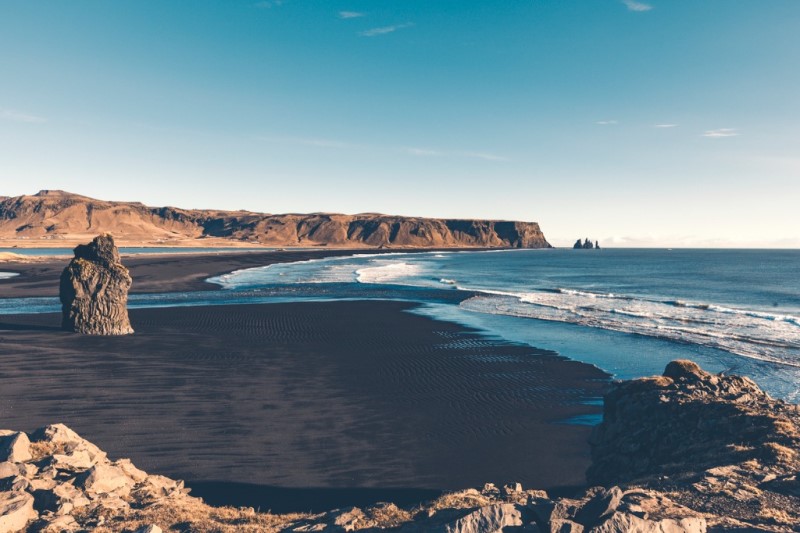 The Beaches at Vik are a sight to behold. No white sand and blue lagoons are to be found here. Instead, you will find a beach that is pitch black. The most famous is Reynisfjara beach.

The sand is so black because of basalt, a volcanic rock formed by the solidification of lava on the earth’s surface. Striking rock formations rise from the sea, making the view even more beautiful. 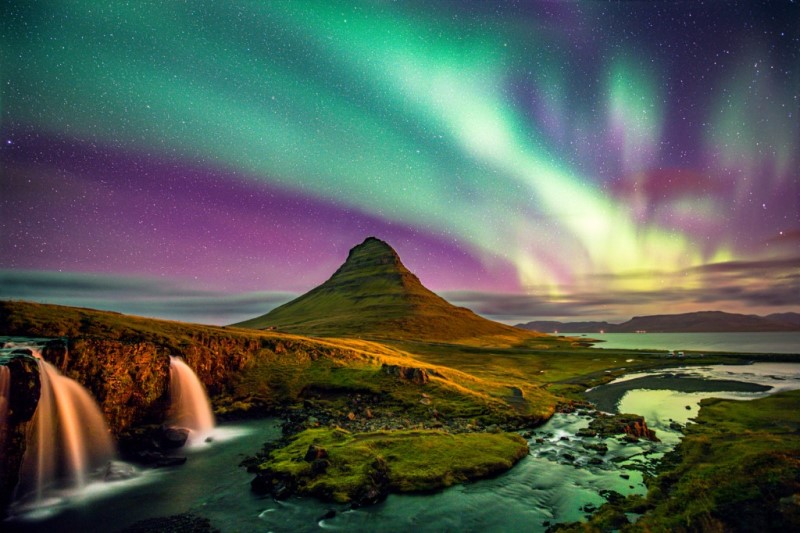 photo by Russell Edwards via iStock

During the long winter that lasts from September to March, Iceland is home to an absolute spectacle in the sky, the aurora borealis. Iceland is one of the best places in the world to experience this phenomenon, better known as the northern lights.

On clear winter nights, sightseeing trips are organized by skilled excursion leaders that specialize in “hunting” the best locations where conditions are best to witness this unique natural phenomenon.

Unfortunately, they are not seen during summer nights because during the summer, it does not become dark at all. So if the northern lights are a must-see for you, you’d better prepare for winter camping as winter is the best time to see northern lights in Iceland. Or you can opt to spend the night in a hotel or other accommodation. 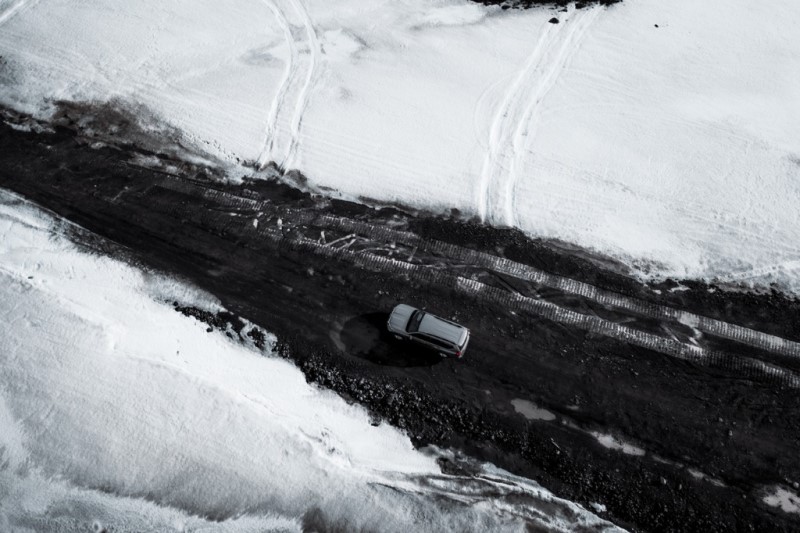 photo by Finn Hafemann  via iStock

If you want to spend your time in Iceland, the first thing you should know is that you drive on the right side of the road in Iceland. The main ring road network is granted maintenance and is kept free of snow and ice as much as humanly possible. The rest of the roads in Iceland, however, are very poor quality, and most inland regions require a 4×4 to get around, which also may cause those parts to be closed.

Icelanders only distinguish between two seasons, summer and winter. Winters run from October to March and summers from April to September. Road conditions can be rough year-round, so use caution when visiting Iceland and driving yourself around the country.

The Rules for Overlanding in Iceland 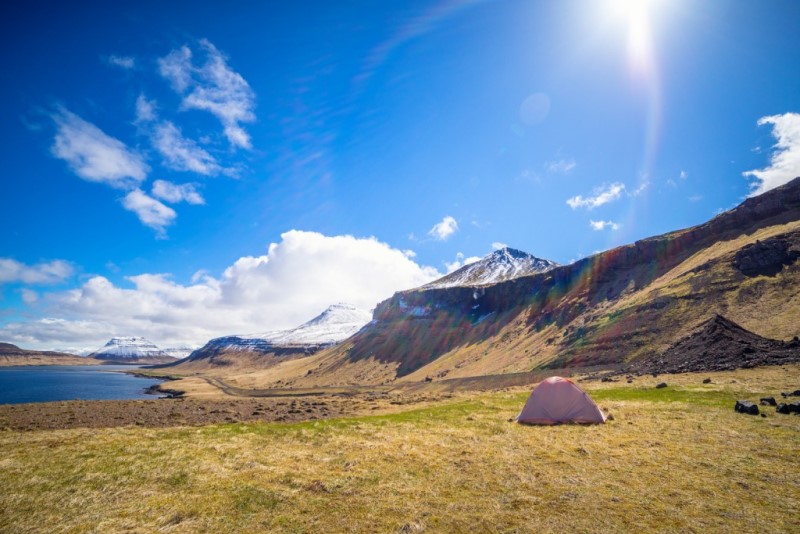 photo by Xsandra via iStock

Iceland is a beautiful country with a lot of focus on sustainability and protecting its nature. Wild camping is not permitted in Iceland, and camping is restricted to camping spaces and privately owned land (with the owner’s permission, of course). But don’t worry, you never have to drive long to find a place where you can set up camp for the night, and some of these sites are in spectacular locations.

Most camping places are only open during the summer months, so if you decide to visit during winter, you may want to double-check the availability of the camping sites. The same goes for the rental companies. Some rental companies don’t rent out at all during winter months, and others rent out great overlanding vehicles that come fully equipped with extra insulation and heating devices for a comfortable trip. If you do opt for a summer trip, bring a sleeping mask as it does not get dark during the night at all. 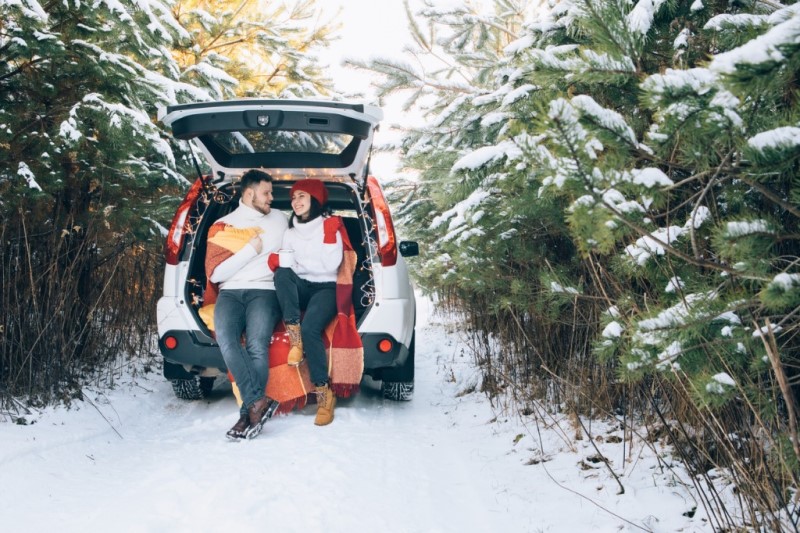 photo by Vera_Petrunina via iStock

You can easily find an offroad vehicle to rent in Iceland because of the road conditions and local interest. The most well-known companies are Northbound, Icerental, LavaCar and Isak 4×4. You can check out their website by clicking the names here and find out about their vehicles and prices. They are all in English and very easy to navigate.

So, there you have it – a quick guide on where to spend your time in Iceland. Get planning now, that way you can explore this incredible place this winter and take advantage of clear skies full of the northern lights!