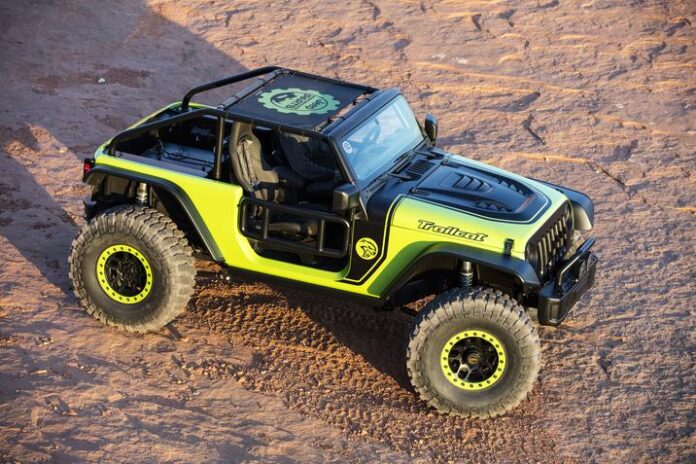 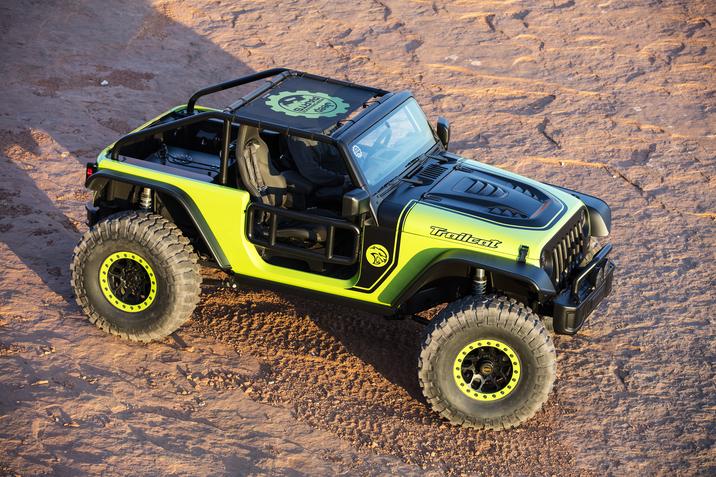 When you pair a Dodge Challenger Hellcat with a Jeep Wrangler, the result is not for the faint of heart. This Jeep with a twist is not what you would expect when you think of a concept car and may very well be the ultimate American off-road machine.

In this article, we will reminisce about the incredible Easter Egg – the 707 horsepower Jeep Trailcat concept that was introduced in 2016 and why we think this concept car fairytale might have a happy ending, unlike many others.

Is the Jeep Trailcat a Typical Concept Car? 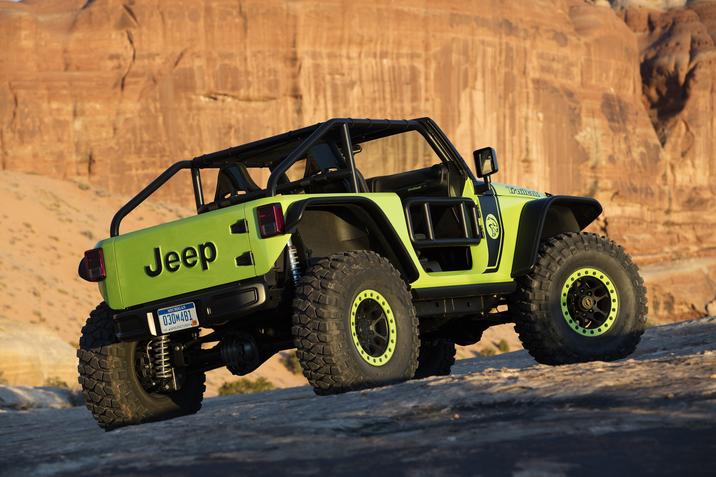 A concept car is usually the end product of months or years of unrestrained creative designer and engineer thinking. Then, when manufacturers want to show the world their capabilities, they develop a concept or a prototype vehicle.

All too often, the prototype car is sentenced to a lifetime in the storage, where it only gets a glimpse of daylight on the occasion of some anniversary and gatherings. Even then, it usually won’t have any drive, so it won’t be allowed out much to begin with.

However, if the concept car is a Jeep, it’s a different story. If it’s one of the brand’s now-famous Easter prototypes like this Trailcat, it might not even make it to auto shows. No, it’s revealed amid the reddish, rocky landscape in central Utah and released out there for test runs.

At least that’s how it has been for the past fourteen years. Jeep’s Spring Festival in picturesque Moab has seen more than 50 concept cars spring into action before the eyes of the brand’s superfans. Most of those vehicles were quite frantic, but the most frantic of them all was the protagonist of the 2016 Jeep Trailcat edition.

Where Does the Name Trailcat Come From? 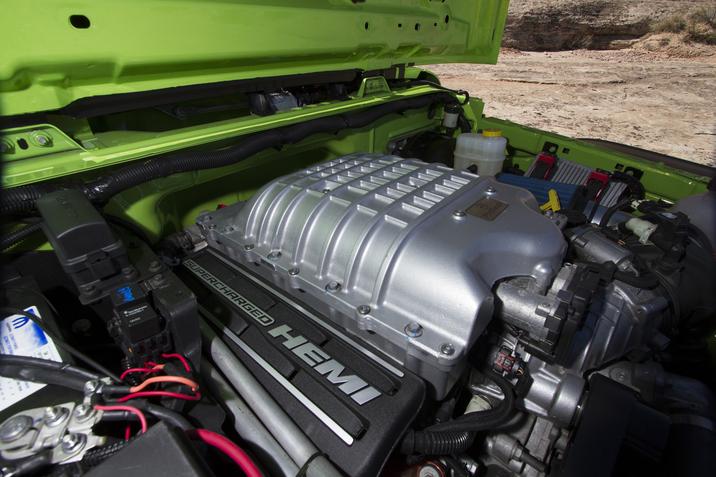 If you’re familiar with muscle car jargon, you probably already know what the term “Trailcat” refers to. It comes from the Hellcat. We are essentially talking about a Jeep Wrangler with the engine of a Dodge Hellcat. A 6.2-liter supercharged V8, 707 horsepower and 880 Nm of torque.

On the market, the Wrangler with the most powerful engine you can buy has 289 horsepower at the moment. It is a great vehicle but it’s not made for a race track at all . However, this one is the worshipped 4×4 in its most wrought-up form, unashamedly pumping its steroid muscles under the brightly colored lacquer. It boasts Ferrari levels of torque, but no real doors. Who wouldn’t want one?

If the sight of it gives you an ear-to-ear grin as you think of sand donuts and the name Dakar buzzes through your mind, then I bet you didn’t stumble across this article by accident. The Jeep Trailcat is crazy but also blessed with the essence that makes cars into true enthusiast machines.

Can the Jeep Trailcat Actually Get on the Road? 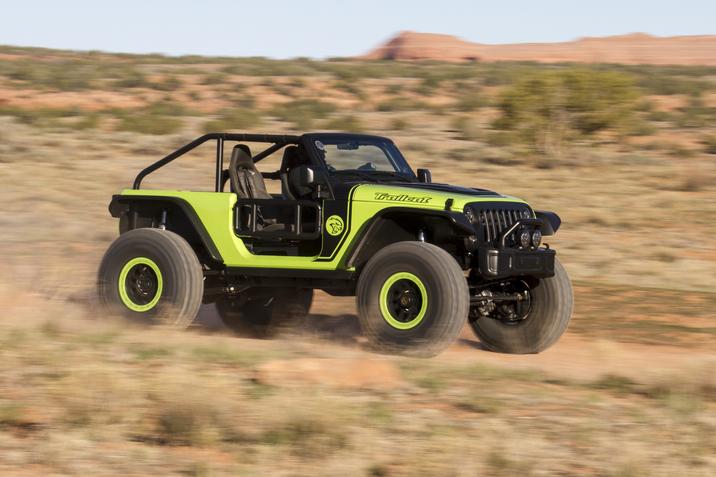 Jeep tosses these concept cars over the toughest routes in the US and their concept cars are very, very real. So, seeing this vehicle on the road in the near future is a huge possibility.

This car might look like a Hellcat-powered Wrangler on paper, but that’s not all. The wheelbase is over a foot longer, the windshield has been shrunk a few sizes and it’s on new Beadlock rims with 39.5-inch all-terrain tires.

The robust roll cage, the heavy-duty Dana 60 thru-axles and the colossal shock absorbers makes the Jeep Trailcat a real eye-catcher. It just makes you want to jump in and try it yourself.

Is Riding the Jeep Trailcat as Spectacular as it Looks? 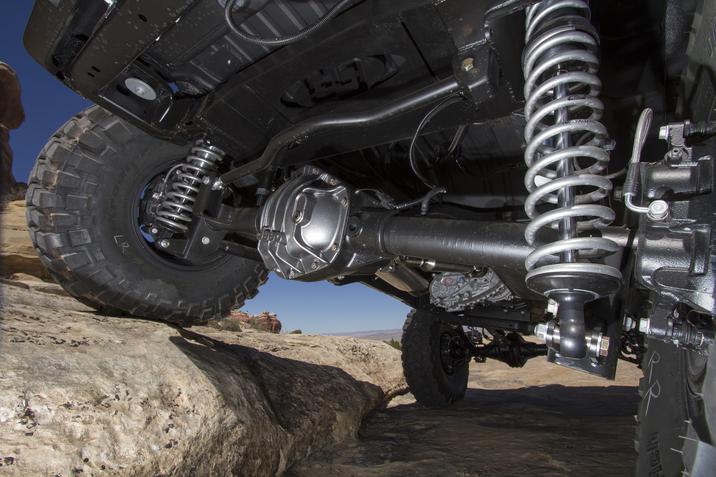 Once you’ve opened that wacky metal gate, it still takes quite a bit of effort to hoist yourself up into the seat belts from the Dodge Viper. Turn the ignition key, and the engine kicks itself to life. Starting the Trailcat’s engine is almost as spectacular as its most exhilarating off-road capability. The entire Trailcat shakes violently as the V8 roars hellishly even in neutral.

Push the billiard ball-shaped stick of the six-speed manual transmission into one – another significant change from the auto-only Wrangler – and no matter how gently you touch the accelerator, no matter how subtle you want to start off, the Jeep Trailcat prances extremely indecently towards the horizon. The car’s front rises, and the rear collapses under the violence of all the horsepower.

The ride in this unimaginable concept car is unhinged, obscene, and insane. While the spring prototypes of Jeep typically allow designers to let loose, giving us a glimpse into the future of automotive design or showing their indebtedness to its legacies, the Trailcat is a different case. It is made to put a smile on the driver only.

Mopar – the parts and service arm of the Chrysler group – supplied the parts, and made it a bright green publicity for all parties. You can never miss the color and the stance of this car.

In short, buy a Wrangler and look for a Hellcat engine. When you find them both, give those Mopar guys a lot of dollars, then you too can become the lucky owner of a Jeep Trailcat. This vehicle could well be a concept car that lived happily ever after.