Will Gasoline Generators Be Phased Out? 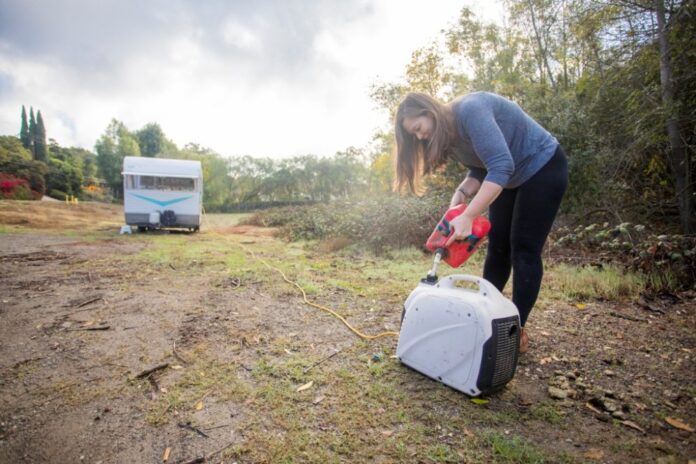 Photo by adamkaz via iStock

Earlier this month, I was reading the L.A. Times and came across a story about how regulators in my home state of California have signed off on a ban on new lawnmowers and leaf blowers that are gas-powered. The ban goes into effect in 2024.

But the regulators also moved to ban new gasoline generators starting in 2028.

Now, while some of you – most of you, in fact – might not live in California, these new regulations are no doubt a sign of the coming times. They were designed to help curb pollution and move California toward a carbon-free economy.

If gasoline generators will indeed be phased out, what will be your options for powering your camper, RV, or devices while you’re overlanding? Here’s a few options.

Photo by Lex20 via iStock

The upside with this approach is that you simply continue using what you have. You have no additional overhead or costs associated with buying a new solar or propane generator.

The downside, of course, is that as your generator gets older and older, replacement parts and servicing for it might become more difficult to find. There’s also the dirty looks from other campers when you pull out a behemoth gasoline generator and fire it up next to their clean-burning solar or propane generator to worry about! 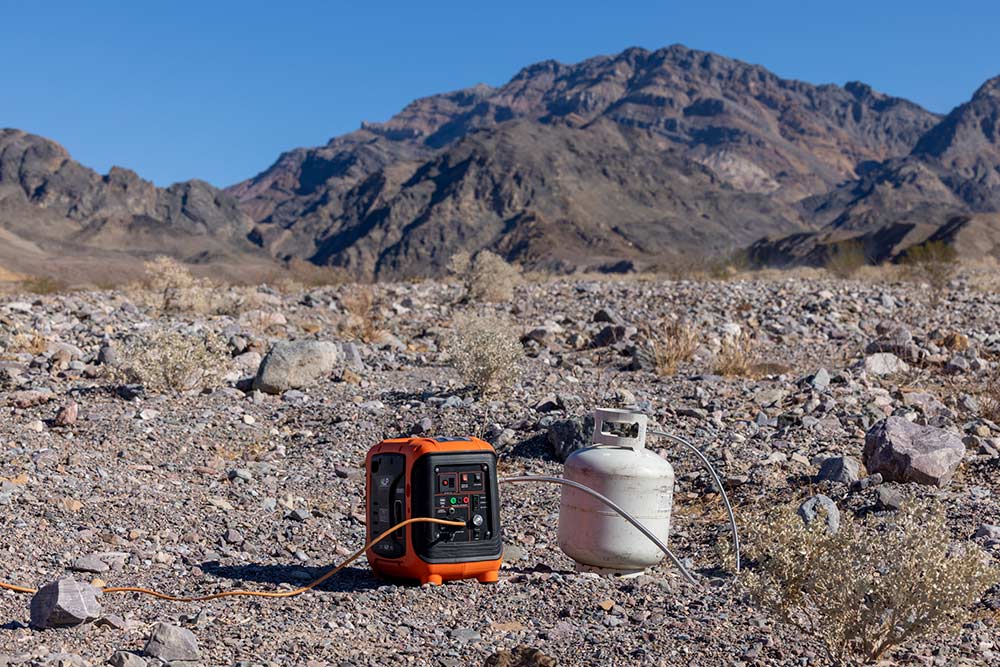 I have a monster 3,000-watt gasoline generator, but I really only have it as a backup power supply for my house in case of a power outage. It’s simply too big, too heavy, and too loud to take on overlanding or camping trips.

Instead, I use an ALP 1000-watt propane generator as my primary overlanding generator. At 1,000 watts, it offers all the power I need for the lights on my Turtleback Expedition Series Trailer, the water pump, the fridge, and to charge up my laptop, cameras, and other devices.

And, unlike my big gasoline generator, the ALP propane generator runs whisper-quiet at less than 52dBa. Not only do I appreciate the quieter operation, but so too do the other folks I’m camping with (and people in neighboring campsites).

Now, obviously this propane generator makes some noise, but it’s quiet enough that you can actually carry on a conversation while you’re standing next to it. That’s not bad! 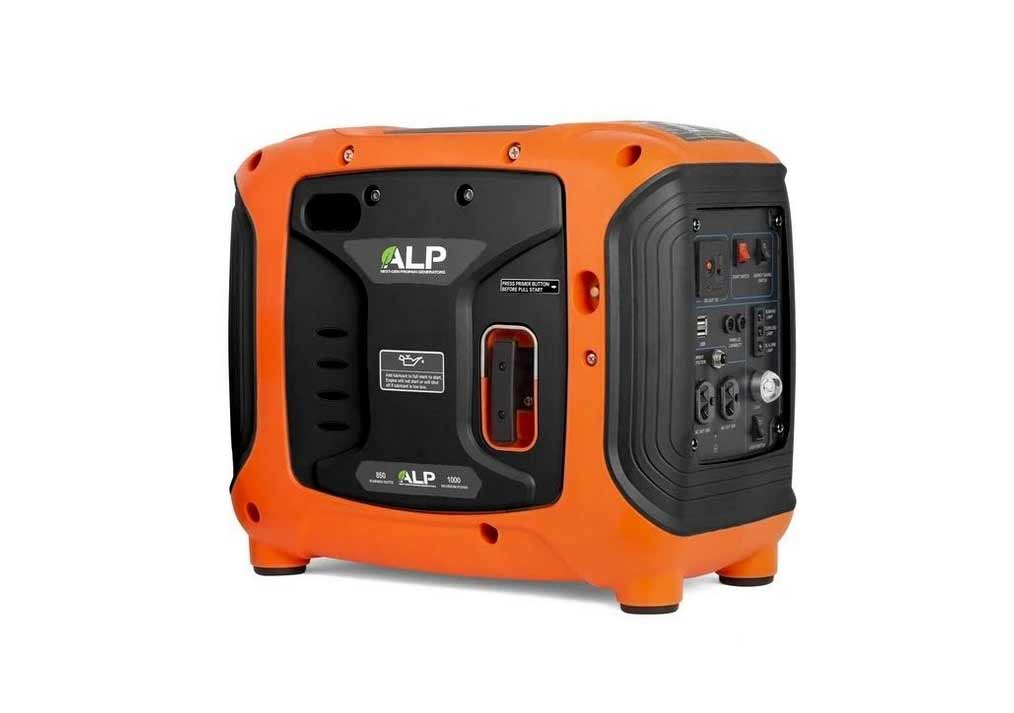 Another feature that I really appreciate about the ALP propane generator is that it’s so much cleaner than a traditional gasoline generator. I don’t have to worry about fumes and exhaust smells. There’s no concern about fuel spillage. There’s no residual gasoline smells in the storage bay of my trailer, either!

Add in up to 60 hours of runtime, dual 120V AC outlets, dual USB ports, a 12V DC outlet, and the ability to run two of these propane generators in parallel, and you have the makings of an excellent option for upgrading your gasoline generator.

Invest in a Portable Power Station

Many years ago, I bought a cheap 1,500-watt gasoline generator thinking that I needed that much power for my very streamlined overlanding setup.

Many camping and overlanding enthusiasts are in the same boat – they don’t have room for a generator nor do they really need one. That’s where a portable power station is a good option for your off-grid power needs.

The Blackfire Pac1000 1500-watt portable power station is one that I highly recommend for camping and overlanding adventures.

Like the ALP generator, this power station is easily portable and gives you all the power you need.

The 1500-watt power station has four 120-volt AC ports rated at 1500 watts (with 3000 watts of surge power). There is a 12-volt port and six USB ports for powering your devices, too (so lots of power options, just like a gasoline generator).

The AC power is delivered via a pure-sine wave inverter. This gives you peace of mind that the power station gives you safe power, even for your most sensitive electronics. 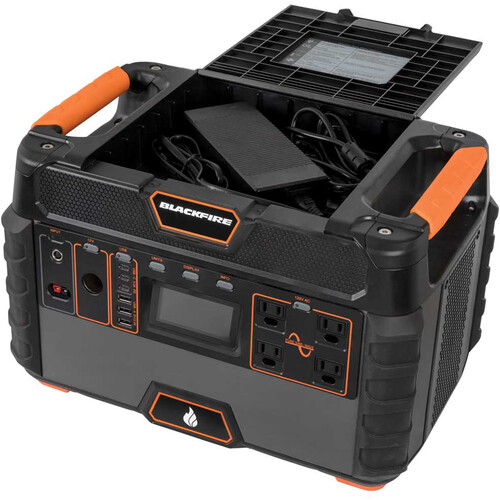 In addition to those features, this bad boy has the ability to be recharged in a variety of ways. You can fast-charge it with an AC charger, use a mobile AC charger, or use a DC car charger. Additionally, you can buy optional solar panels for charging the unit. Not bad, right?!

The power station even has a display that gives you battery information, the time until the battery is empty (or how long until it’s fully charged), and input and output data. There’s also a replaceable air filter for the cooling intake to ensure smooth operation.

And since this is a 1500-watt unit, you get all the power you need for charging your devices, running lights in your trailer, running the water pump for a shower or to wash dishes, and so forth.

This smaller power station offers two 120V AC ports with 1000W of surge power. You also get a 12V DC output and four USB ports (two Type-A, one Type-C, and one Type-C PD).

Like its big brother, the 500-watt power station can be charged via AC, DC, or solar power and a handy front information display.

Of course, both the 500-watt and 1,500-watt power stations from Blackfire offer the advantages of no smelly fumes, gas spills, and other inconveniences of gasoline generators.

So, whether you opt for a clean-burning propane generator or a self-contained portable power station, there are very good options for replacing your gasoline generator.

While the ban on new gasoline generators doesn’t take effect for many years, I suspect that many other states will adopt similar measures between now and then. It’s best to be prepared for it by using one of the options outlined above.