The Iconic Suzuki Jimny, a Tiny 4×4 with a Great Personality 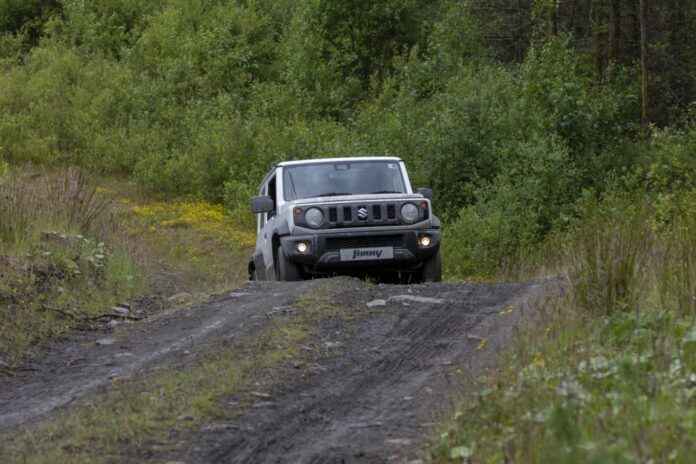 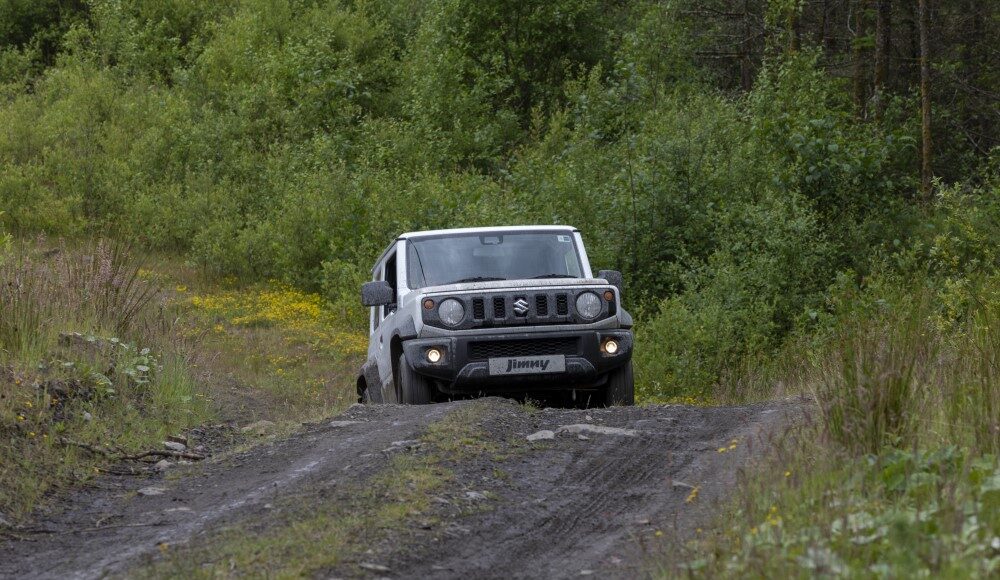 The Suzuki Jimny has been around for almost fifty years and, despite its age, is only in its fourth generation. Although we haven’t known this car for that long under the name Jimny, it has been available on the Japanese market since the 1970s.

A ladder chassis, selectable four-wheel drive and everything focused on functionality and off-road capability. All this despite its minimal dimensions. The Jimny is still popular and is even starting to develop quite a cult following. Add a bull bar, lift kit, thick terrain tires, roof rack and snorkel on it, and you have a lot of affordable fun.

My personal opinion would be that this car screams a rear window sticker naming it “the dinky-toy”, and I have more than once now considered buying one myself.

The Style of the Suzuki Jimny 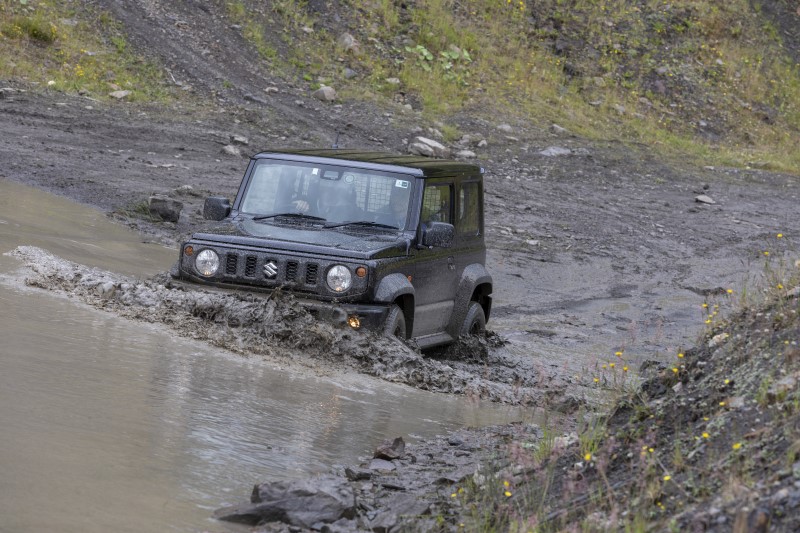 After the previous generation had been available for twenty years, it was time for something different in 2018. Funnily enough, at first sight, unlike other vehicles on the market, it does not appear more modern or aerodynamically designed than its predecessor, but rather more square and more functional.

The windshield in the Suzuki Jimny is more upright, the windows have been enlarged for more visibility, and the hood has been lined up straighter to communicate more clearly with the driver how much space is left up to your next obstacle, in short: it is about off-road creds and fun, not to save fuel on the highway.

The round headlights, upright grille, hood and taillights are all subtle references to previous generations of the Suzuki Jimny. However, this little machine is proud of its origin and also tries to respond to the retro lifestyle class: the MINI and the Fiat 500, for example.

All in all, the Suzuki Jimny looks a bit like a shrunken Mercedes G-Class and has been referred to as the G-Class’s little brother on numerous occasions. No idea whether that was the intention and whether they are happy with it at Suzuki, but people seem to like the resemblance, so many people have brought the two models together for a family picture.

Comfort in the Suzuki Jimny

The Interior of Jimny is also highly functional. The instrument panel is made out of scratch and stain-resistant material, and the buttons are large for easy operation, even with gloves on, just like the old Range Rover.

They don’t have many options for comfort, but they have some clever points. For example, the dashboard lighting is always on and does not depend on the settings. This feature is helpful when you can’t read the counters well in rapidly changing light conditions, like when you’re driving in the forest with the light coming in between the trees. In addition, a 7-inch touchscreen is available for your center panel in the more luxurious versions.

To be fair: it is classic Japanese with a lot of plastic that is not necessarily of high quality. In addition, it is a pity that some “screws” are simply part of the plastic. 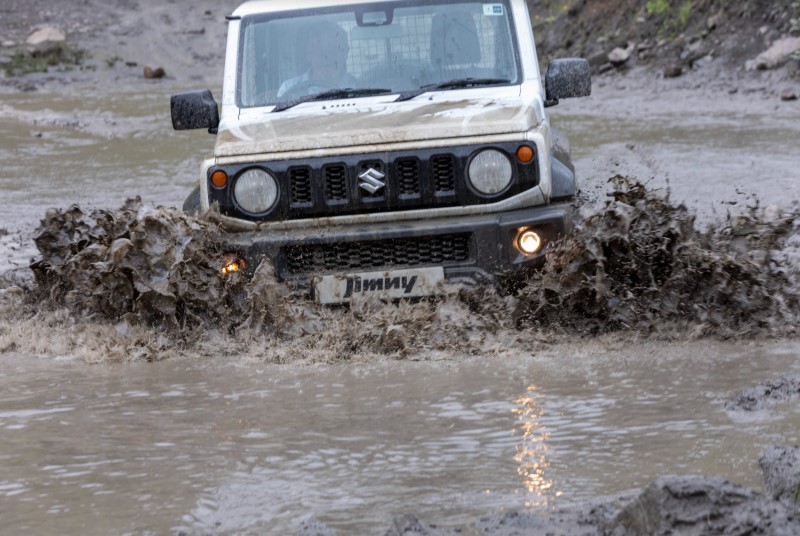 The most important parts are, of course, the engine and chassis. The ladder chassis on the Suzuki Jimny carries a 1.5-liter four-cylinder gas engine that is good for 102 hp and 130 Nm. This engine is linked to the ground with a five-speed manual transmission, which divides the forces between two or four wheels.

An optional four-speed automatic transmission is available, but only on special request because it is very costly and frankly not that great on the trail.

The Suzuki Jimny is a Capable Off-Roader 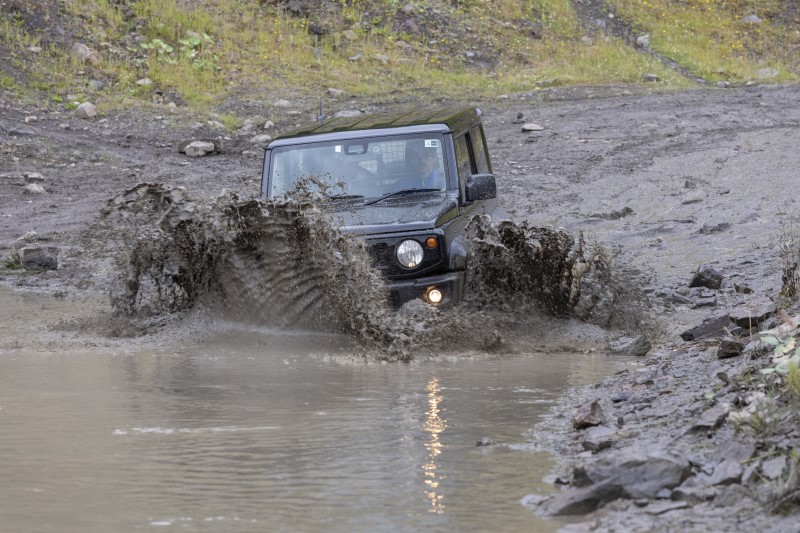 The car has switchable ALLGRIP PRO four-wheel drive, with a high and low range. If two wheels at opposite angles lose traction, braking interventions ensure that the wheels with the most traction get the engine power.

The approach angle of the Suzuki Jimny is 37 degrees at the front and 49 degrees at the rear. The ramp-over angle is 28 degrees. Furthermore, the Jimny has a 3-link rigid axle suspension or fixed axles, so wheels are constantly pushed in the opposite direction. For example, suppose that a front left wheel is pushed up in the wheel arch because it has to go over an obstacle, then the front right wheel is pushed down to the ground to maintain traction. Not necessarily great for handling, but functional off-road.

On the latest model of the Suzuki Jimny, much has been done to increase the rigidity of the chassis. This increases comfort on the public road. A steering damper is also fitted as a standard to filter out vibrations from the front wheels for road use.

To be fair, it still doesn’t steer fantastic on public roads, but it is much better than the outgoing Jimny generation. It is certainly not bad, but it is a bit bumpy and has a slight steering feel. In addition, you have to rev up the engine quite a bit and still, you won’t be very fast. But you forget all that immediately when you enter the terrain.

Our Opinion on the Suzuki Jimny

The Suzuki Jimny defends himself very bravely on the trails. Steep, slippery slopes, even steeper descents, deep mud pools, and dry, rocky riverbeds can’t embarrass the Jimny despite its size. Of course, this is thanks to intelligent systems such as hill descent control, hill hold and four-wheel drive with high and low ranges. You should only use it on loose surfaces if you don’t want to break things.

The new Jimny may be small in size but is big in performance and character. So if you have a chance to even rent one while on a 4×4 trip around the world, I would recommend giving it a try just for the sheer amount of fun this small but fierce Japanese 4×4 will give you.