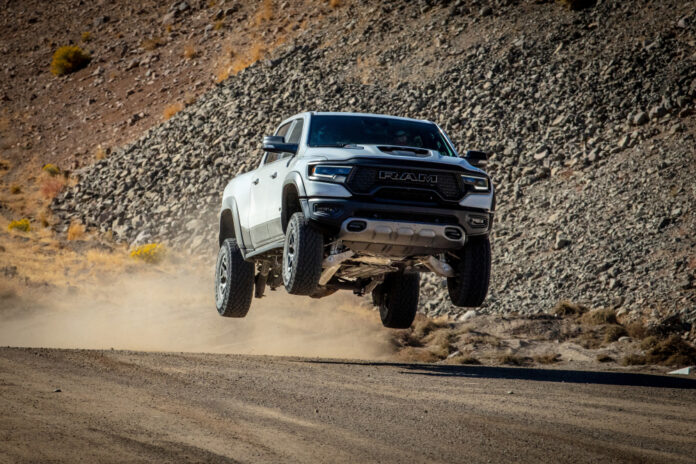 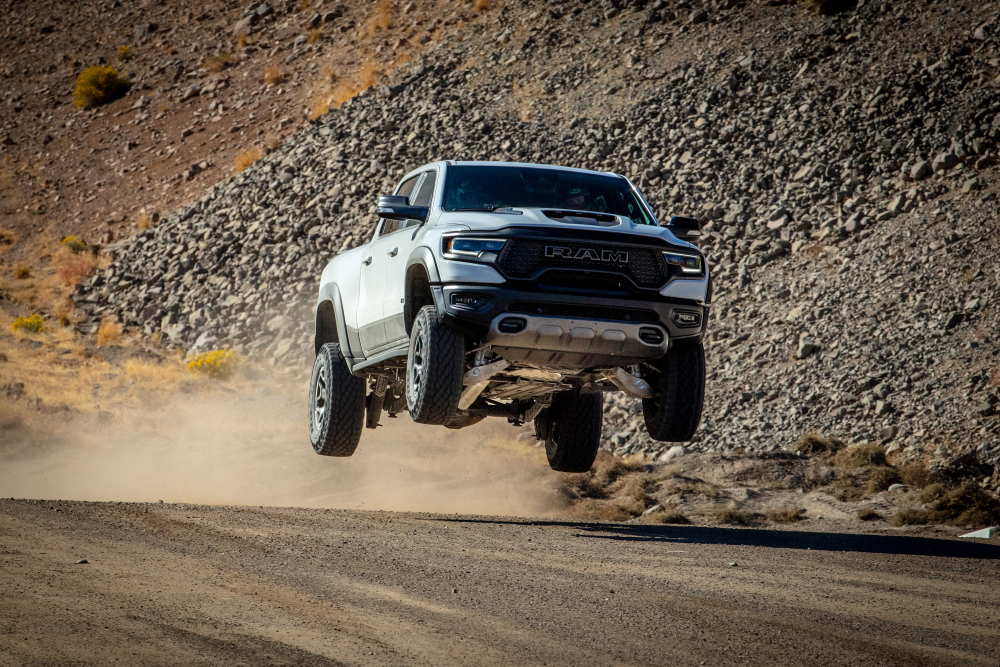 Can a pickup truck be called a supercar? I mean, the Ram TRX will certainly put a lot of them to shame in a drag race.

With stupendous amounts of power, 35-inch tires, and desert bashing suspension the Ram TRX is not your average truck.

Just how good is it though? In today’s article, we find out! 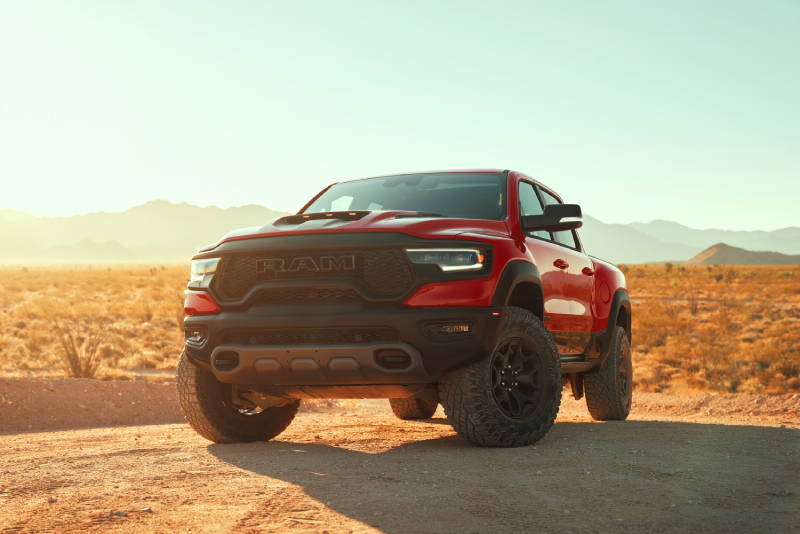 With the TRX, Ram wanted to go head-to-head with the Ford Raptor, and they have done well.

Development of the TRX took time and for good reason. If you are planning on competing with one of the best desert bashing trucks ever made you need to go through some thorough testing.

All this has led to an overbuilt truck that can take a lot of punishment.

First, the suspension design and geometry are incredible. The Ram off roading engineers have managed to build a truck that can ride great on road while being able to cope with the large hits of off roading.

All this is achieved with great suspension geometry.

Along with great suspension geometry, we get some of the best shocks on any current truck for sale. The Bilstein remote reservoir E2 dampers are built for optimal high-speed control over uneven terrain and to make sure the TRX remains composed. To ensure smoothness over large impacts the TRX also runs hydraulic bump stops which for a factory vehicle with a warranty is insane!

For durability, the front upper and lower control arms are forged. A process that makes them much stronger than conventional control arms.

Ram off roading engineers have also stated that the Bilstein shocks will not have to be rebuilt throughout the lifetime of the truck.

The strengthening of components is so substantial that 74% of the frame is either strengthened or changed altogether.

Finally, to ensure the power can be put to the ground through those heavy 35s reliably, the rear axle is a Dana 60.

Dana 60 axles are known for their strength; therefore, it makes sense that Ram off roading engineers have chosen to use them. 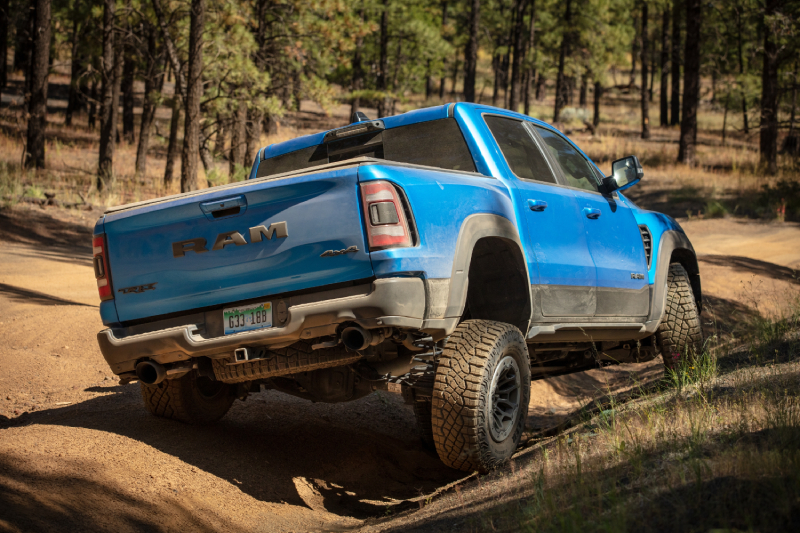 The Ram off roading engineers didn’t want to make a truck that is just fast and off road capable. They wanted something that was also luxurious, and in our opinion, they have achieved their goal.

Gear changes are also great due to an 8-speed automatic 8HP95 transmission.

Inside you get premium materials, a 12-inch touch screen with all the latest technology, and a general quality and luxurious feel.

The interior design is certainly one of the best on the truck market, meaning that the TRX also hits the spot when it comes to luxury. Just like most off-roaders in the current market, the TRX offers a variety of modes to choose from. These include snow, mud/sand, rock, and Baja.

What this does is alter the behavior of the traction control system depending on the mode you have selected.

All this is great, but no traction control has managed to better differential lockers yet. The TRX has a rear locker which is great, but would have been even better if it also offered a front one.

Thanks to the 35-inch tires and a ride height that is taller by two inches compared to other Ram 1500 products, total ground clearance for the TRX is 11.8 inches.

As far as other off-road features are concerned the TRX has most of them as standard – meaning there is no need to pay extra for added capability.

Aside from the adaptive dampers, lockers, and all the other features mentioned above the TRX gets skid plates to protect vital mechanical components, a wider stance to improve stability, off road pages that project information such as wheel articulation, and a 360-degree camera that helps the driver know where the tires are placed.

All the above features mean that the Ram off roading engineers have managed to produce a unique off-road package no other truck can mimic.

When it comes to pure rock crawling abilities, a Gladiator Rubicon may be better thanks to its solid axles and front and rear lockers. However, when it comes to high-speed desert bashing – nothing compares. 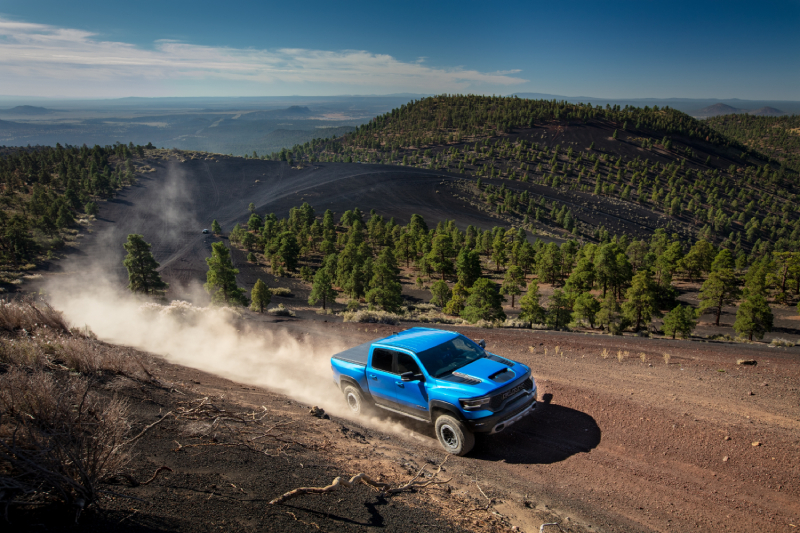 Ram off roading engineers never wanted the TRX to be a rock crawler. As a competitor to the Ford Raptor, its main focus from the get-go was desert bashing. This provides a unique driving experience.

Ram Off roading Means Tearing Up Terrain at Stupendous Speeds 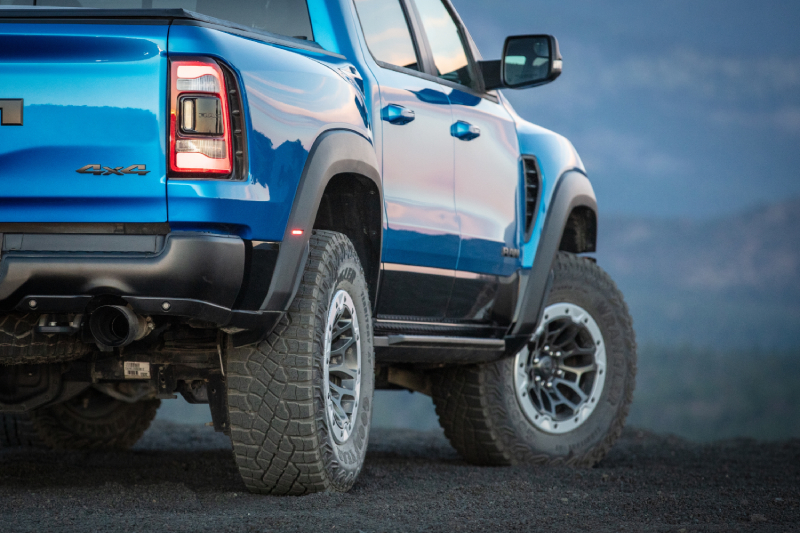 Big holes, humps, or even jumps are no issue. The thing even has an air-born sensor for the traction control system from the factory!

In other words, even Ram lets you know you can jump it.

So, with a screaming 707 horsepower V8 bashing through the desert there is not much to dislike about the off roading abilities of the TRX

Ram Off roading Involves Tearing Up the Sand Dunes

Dunes and sand driving, in general, requires power and as you know there is no shortage of it in the Ram TRX.

Because of this, it means that having fun at the dunes has never been better in a factory vehicle.

No matter how steep or long, build up some momentum, bury the throttle and the TRX will scream its way up just about any dune regardless of length or steepness.

Ram Off roading Means Fun in the Snow and Mud

So, snowy, or muddy trails become a screaming skid-fest for the TRX and there is nothing more fun in our book.

Why Ram Off Roading Isn’t a Good Plan This may sound counter-intuitive, but there are a few reasons why Ram Off roading isn’t a good plan

First, the truck costs nearly $80000 and that’s before you add any extras. So, you will feel every single scratch, ding, and rock hitting the paint.

In other words, it is a bit of a shame to bash such a nice truck while off roading. However, this is the purpose it was made for, so if you can afford it, then by all means enjoy the toy you have got.

The second reason why Ram off roading is a bad idea is fuel consumption. The TRX gets about 7mpg which for today’s standards is horrible – especially with the current fuel prices.

Therefore, off roading trips will not be cheap, but you don’t buy such a truck to save up on fuel, do you?

So, if $80000 is a sum of money you can afford but will need to save up for a long time, or if the current fuel prices are too much to handle then Ram off roading may be a bad idea.’

If on the other hand $80000 is a sum of money you can easily afford (let me know what the secret is) then Ram off roading isn’t much of an issue. 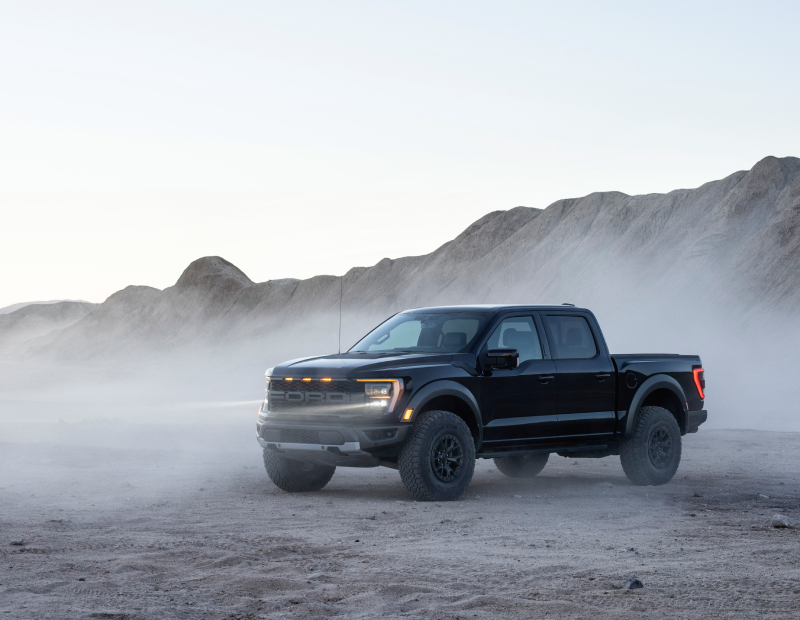 The first Ram off roading alternative is the Ford Raptor. It may be an obvious one, but is also the reason the Ram TRX exists.

Now, Ford has taken the V6 route with the Raptor which has disappointed a lot of fans.

In terms of suspension and chassis behavior, the TRX also has the edge.

At $70370 for the Raptor, the Ram is a more expensive vehicle so the differences can be justified. Also, a Raptor R is coming which should offer performance much closer to that of the TRX. 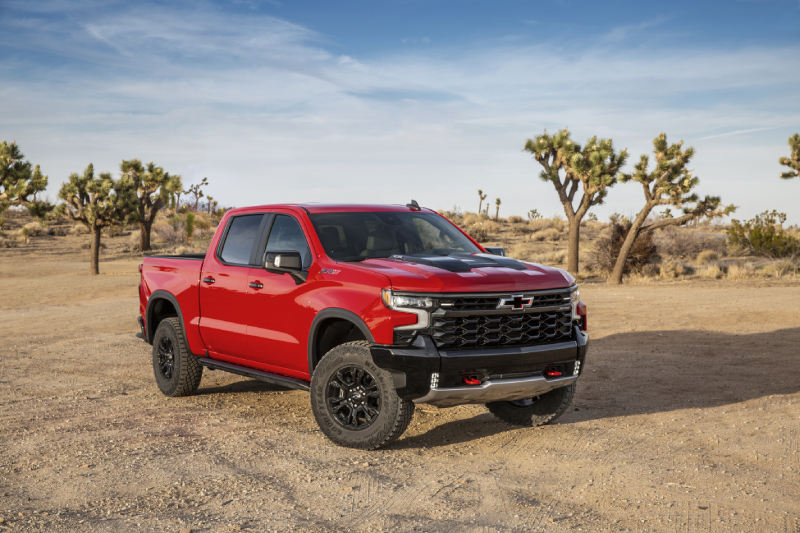 The second Ram off roading alternative is the Chevy Silverado ZR2. This one is not as extreme as the Raptor or the Ram but it still is no ordinary pickup.

It has a 420hp V8, 33-inch tall tires, and upgraded suspension that includes multi-matic spool-valve dampers.

The interior is also decked out with a digitized dashboard and the crew cab body style means your mates can also enjoy the ride when the blacktop ends.

Pricing starts at 69,295 which means the Silverado is priced competitively while also offering a V8 which the Raptor does not. 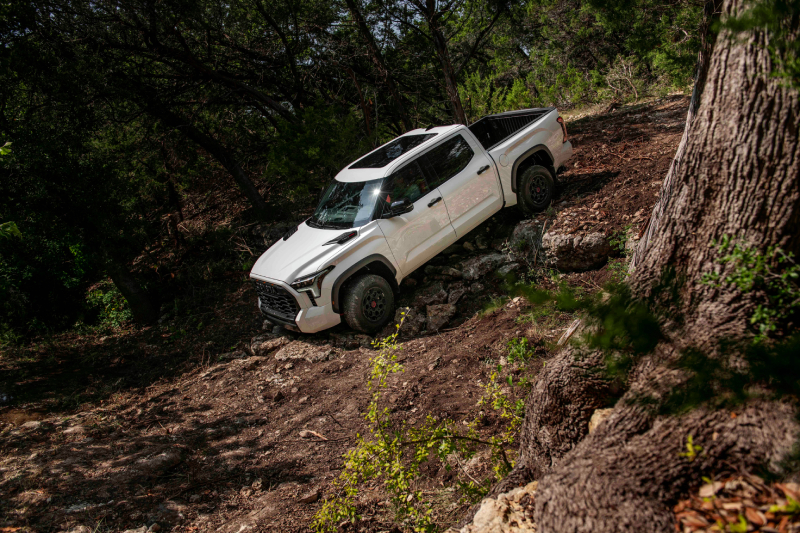 The third and final Ram Off Road alternative is the Toyota Tundra TRD Pro. Again, a milder option compared to the Ram TRX and Ford Raptor but still capable.

The truck is powered by Toyota’s all-new 3.5-liter twin-turbo V6 hybrid that offers a power rating of 437hp and 583 lb-ft of torque.

The transmission is a 10-speed automatic, skid plates come standard from the factory and the truck offers a locking rear differential and traction control that helps maintain grip in off road situations.

Starting price is $69200 which is very completive. All around, the TRD Pro is a great truck that to a certain extent, offers off road fun but for a lower price and in a more fuel-efficient package. 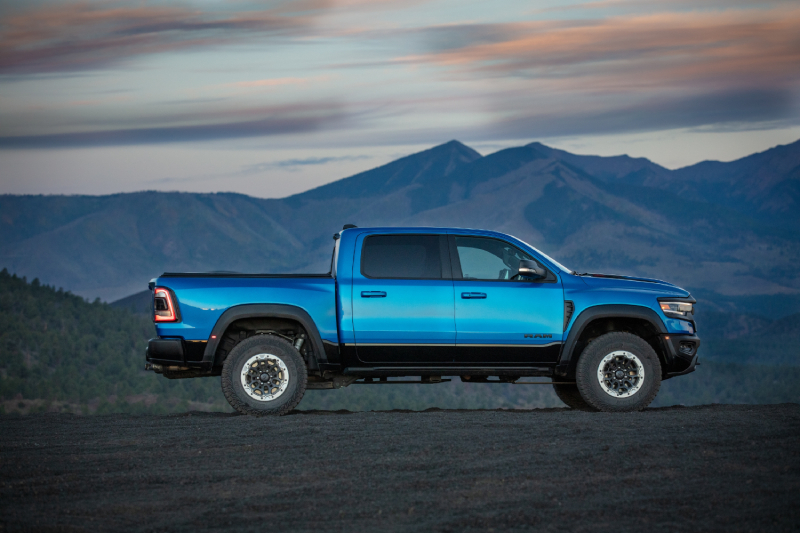 The Ram TRX is a truck every lover of off roading must appreciate. In a world obsessed with downsizing, the TRX is the behemoth. The screaming monster that brings a smile to your face every time you see it pass on the road.

For that alone, we believe the TRX deserves every penny of its asking price.

If you have any further questions regarding the TRX, other Ram off roading trucks, or truck choices in general visit the forum section of our page.