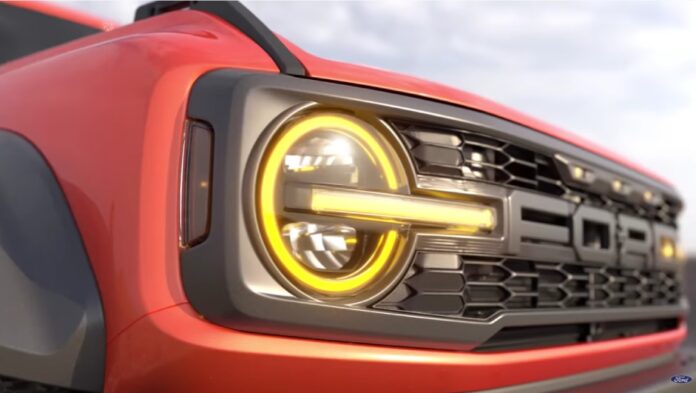 Your wait is over! Here’s an incredible first look of the 2022 Ford Bronco Raptor.

Just last week, we reported that Ford appeared to be working on a Raptor version of its new Bronco.

Yesterday, the Blue Oval released the video below teasing the upcoming Bronco Raptor.

And by tease, I mean it’s a tease…

We hardly see anything in terms of the looks of this thing, but we at least get a good, long look at the front fascia and grille, which, unsurprisingly, look Raptor-esque.

If you look closely in the video, you can see big fender flares, too, which will be needed for what are sure to be gigantic off-road tires.

As we discussed in last week’s article, the Raptor trim will only be available on the four-door Bronco, so apologies to all you two-door Bronco fans out there…

Beyond that, there really is nothing else to report – rumors or otherwise – about the 2022 Ford Bronco Raptor.

We’ll have to wait until 2022 for its release, but between now and then, there will surely be more teasers from Ford and an official announcement replete with photos of the interior and exterior of this bad boy. We’ll keep you posted on all such developments!