Anatomy of an Extreme Off Road Teardrop Trailer 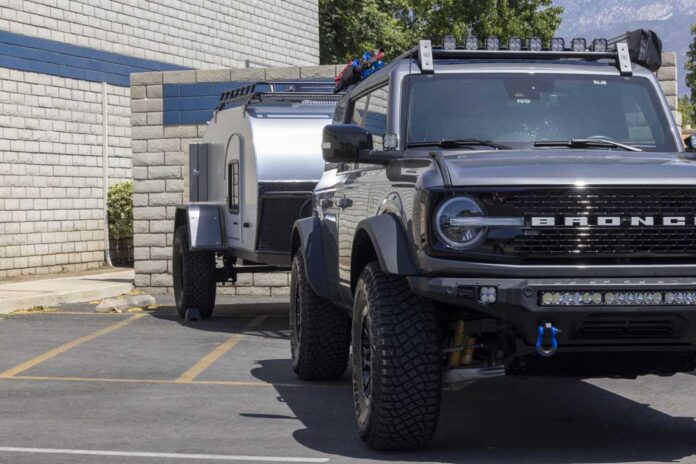 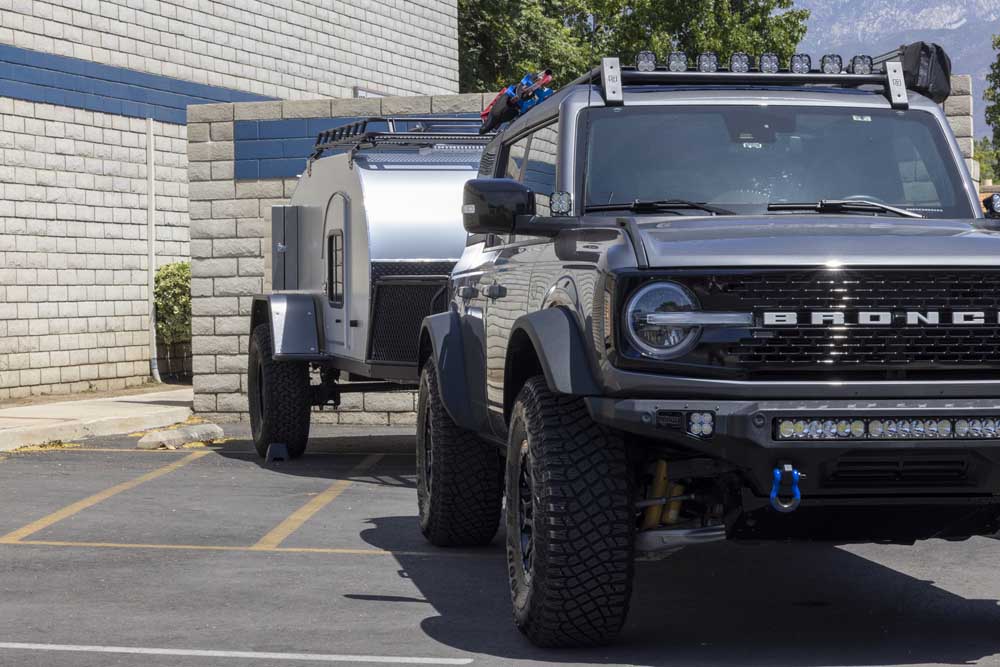 An extreme off road teardrop trailer, you say? How does an off road trailer become extreme?

Well, there’s quite a few factors involved in a traditional off road trailer moving into extreme territory…

There’s the obvious stuff – an upgraded chassis and suspension, improved brakes and shocks, bigger tires, and so forth.

But it isn’t just the gadgetry that makes an off road trailer extreme – there’s tons of innovation, design, and hard work that goes into creating extreme trailers. And not all teardrop trailer companies have what it takes to get their rigs to extreme levels.

Since I’m in Southern California, I headed to Rancho Cucamonga to the headquarters of one of the most well-established and respected trailer companies in this market – So-Cal Teardrops.

These folks make some of the best off road teardrops in the world, including extreme models that are built to go to the furthest reaches of the globe.

So, if you want to know about the anatomy of an extreme off road teardrop trailer, let So-Cal Teardrops and I show you! 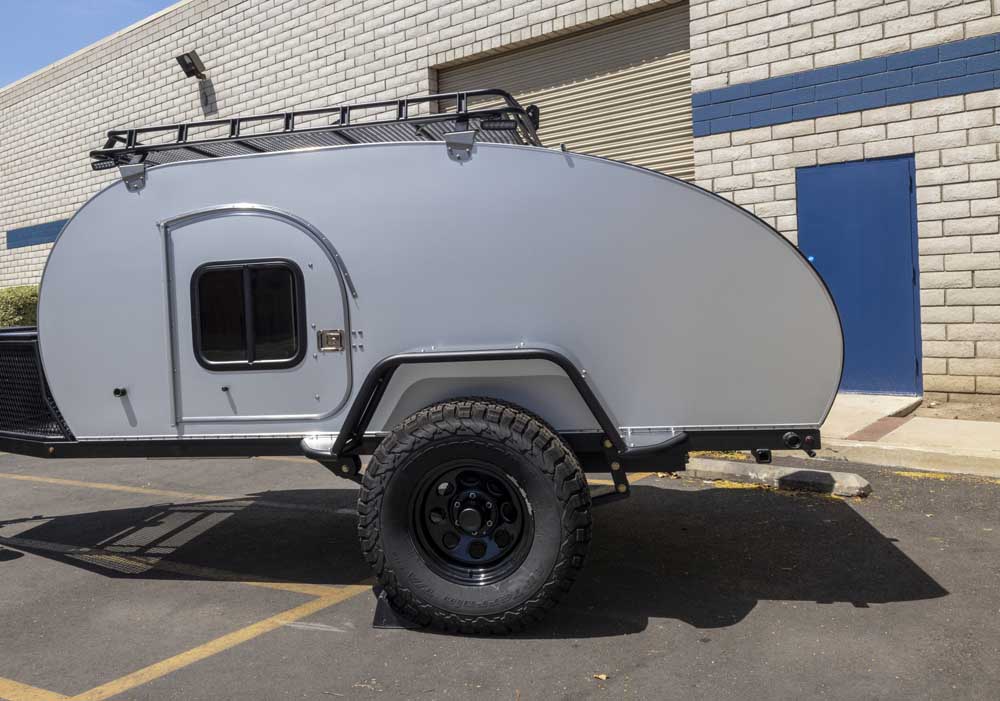 I’ve been a fan of So-Cal Teardrops for a long time (as have many of my colleagues in the off roading and overlanding space).

Over the years, I’ve seen many of their trailers at events and on the trail, and have always been impressed with the design and build quality of their products.

But, I hadn’t yet seen their extreme off roader – the XS511 – in person, and it was something I wanted to see with my own eyes. And let me tell you, this thing is impressive! 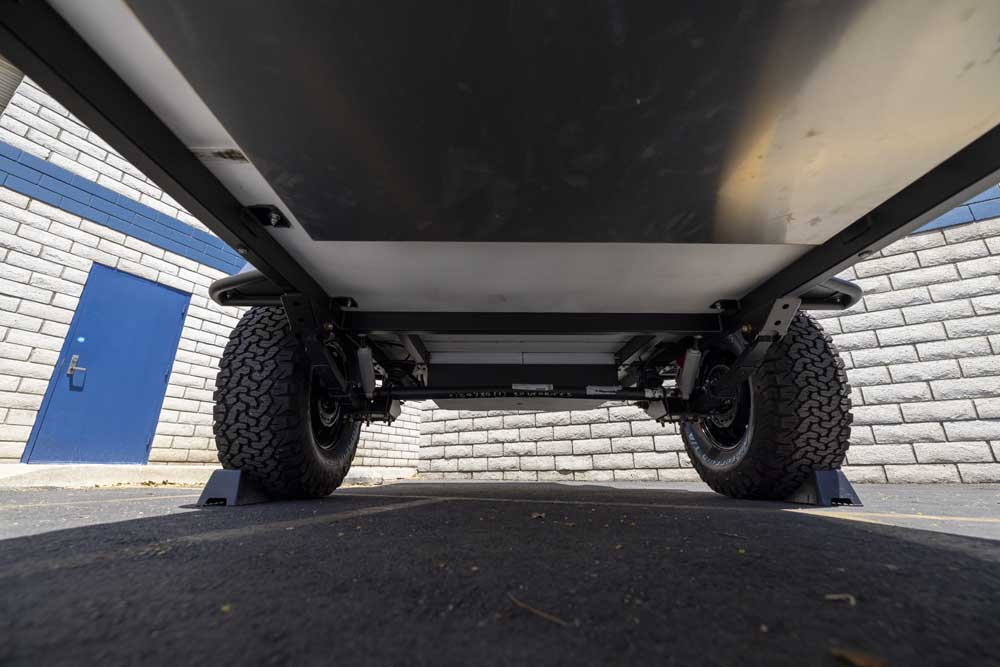 As I mentioned earlier, an extreme off road teardrop trailer has to have a robust build to handle the rough-and-tumble trails you navigate on extreme off roading trips. To that end, the XS511 features: 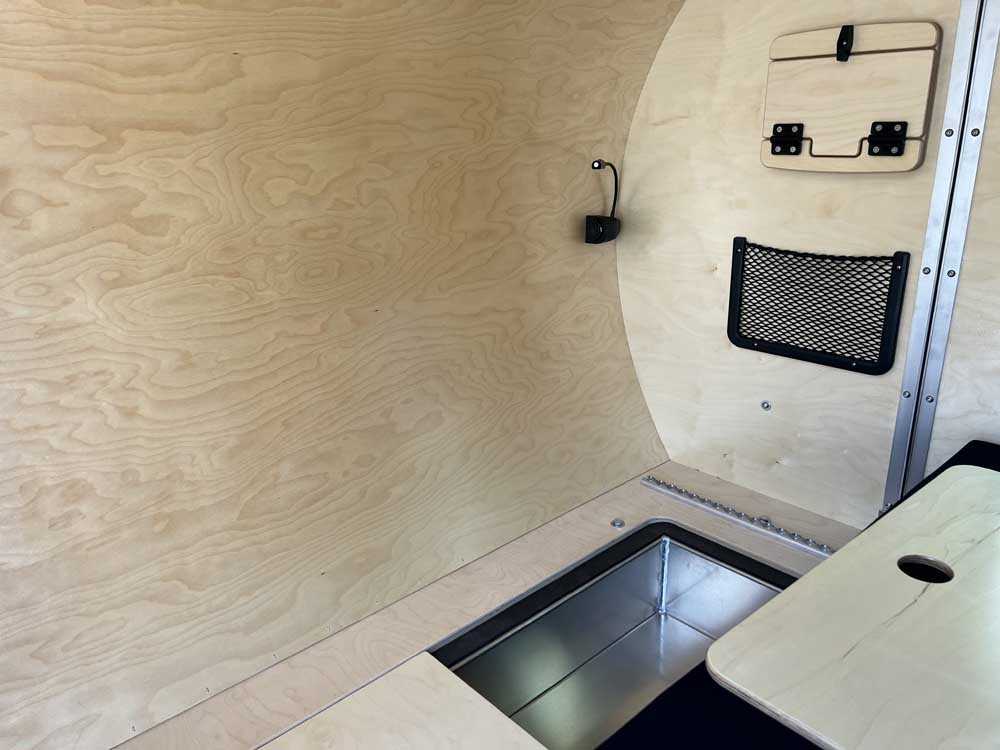 The So-Cal Teardrops XS511 also comes with marine-grade cabinetry in the galley and inside the cabin, reinforced ribbing, and double-sealed openings. There’s even a handy in-floor storage compartment that can be used as a cooler or for storage. 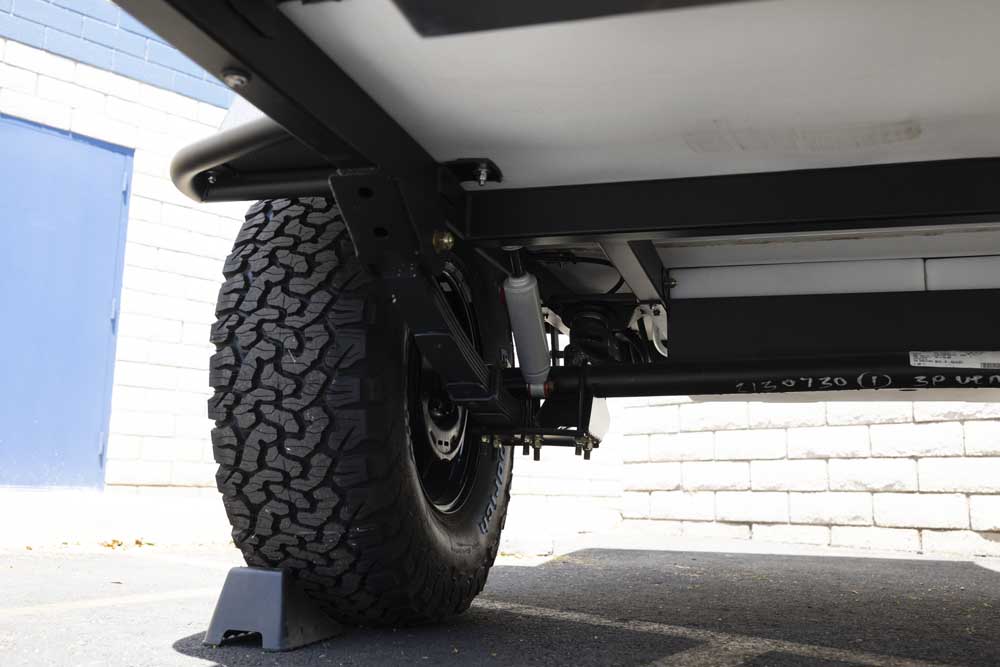 Setting features aside for a minute, an extreme off road teardrop also needs to have the capability to get up and over the roughest terrain in the world. Since this trailer has 18.5 inches of ground clearance, it can go anywhere that your tow vehicle can go.

Case in point – when I was at the So-Cal Teardrops facility, I met a gentleman named Bob who was there picking up his XS511 trailer. We got to chatting, and it turns out he’s embarking on a five-week trip to the Arctic! Talk about trial by fire, eh?!

He’s pulling the trailer with a new Ford Bronco Sasquatch that has been tastefully upgraded to handle rough terrain. Between the Bronco and the trailer, I think Bob is all set for some extreme adventures.

But that’s the beauty of this trailer. As an extreme off roader, it is purpose-built for exploring harsh and difficult terrain. I’m not sure you’ll find a harsher and more difficult environment than the Arctic!

What Features Do You Get in an Extreme Off Road Teardrop? 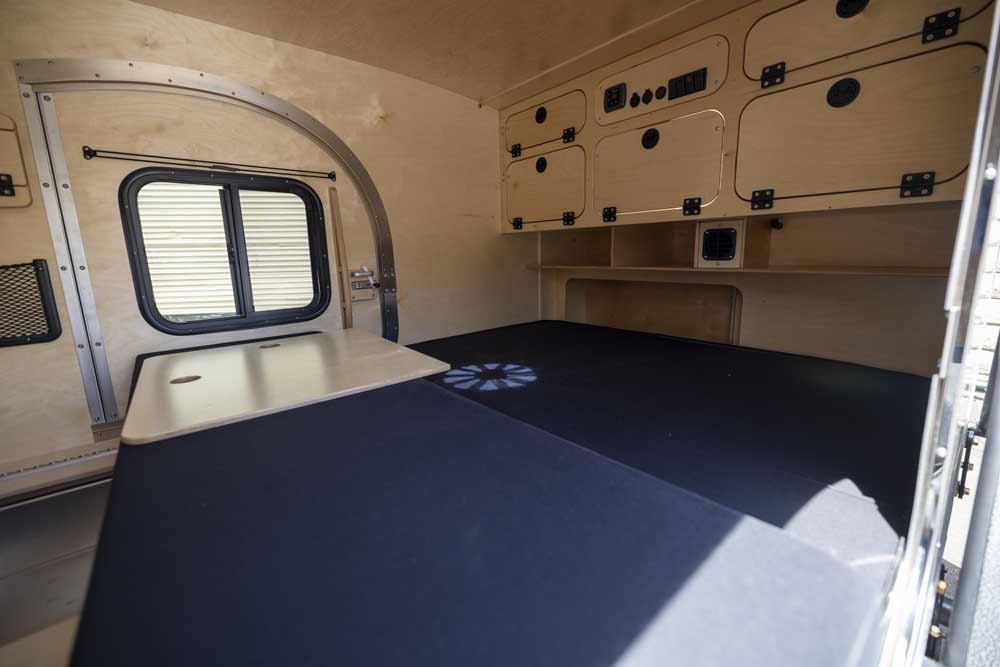 Just because this is an extreme trailer doesn’t mean it’s a bare-bones rig with no amenities. Far from it! 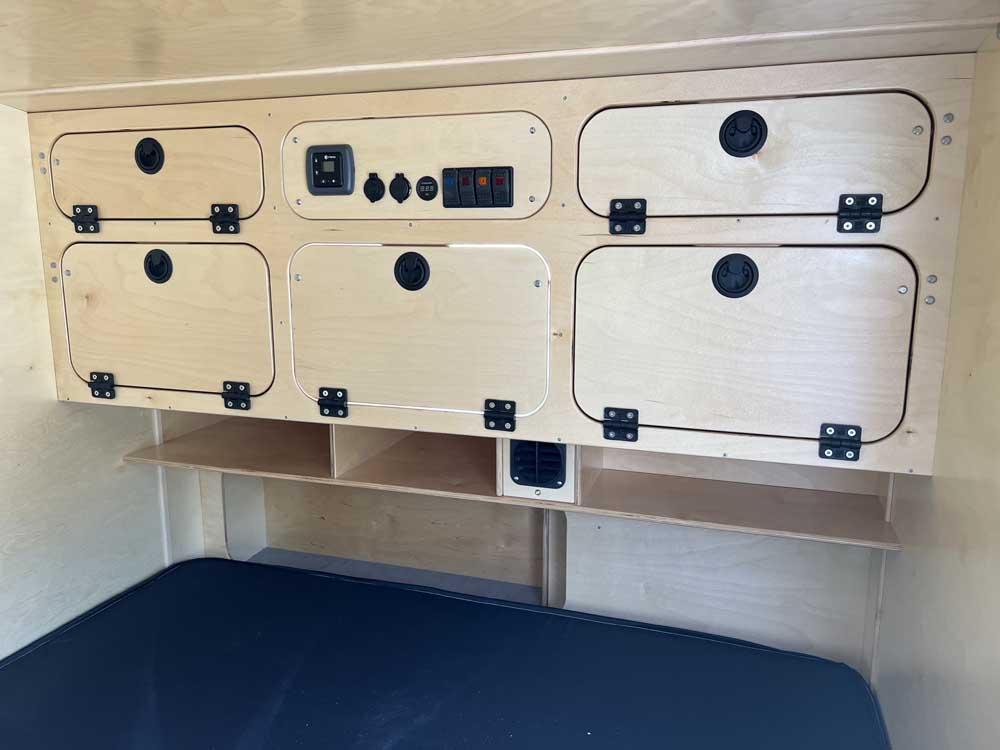 If you want to sit down to grab dinner, the cabin features a fold-out table specifically for that purpose. Need to charge your phone or other electronics? No problem! Just use the array of power points inside the trailer to get your gear charged up. 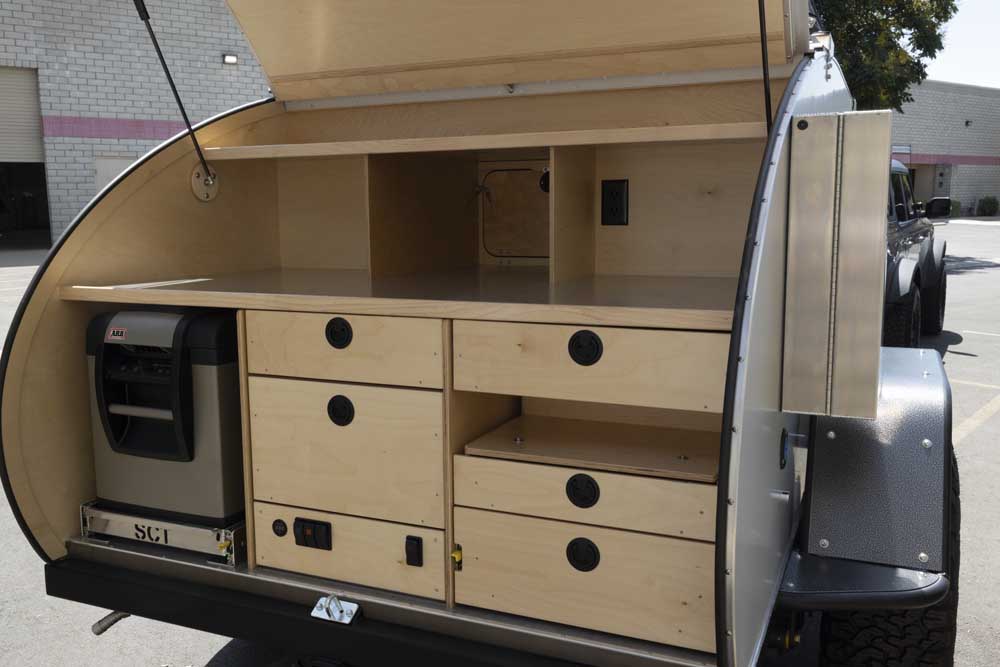 In back is a huge galley – again, made of Baltic Birch – that offers loads of space for all your kitchen essentials.

There’s a spot for a slide-out fridge or cooler and a slide-out two-burner stove. Prep your meals on the spacious countertop and keep all your food and cookware organized in the abundance of drawers and cabinets. The rear hatch opens to 80 inches tall, too, so you can stand tall as you cook – and you’ll be protected from the elements as you do it. Also on the outside of the trailer is a spacious tongue box and enclosed gear storage area where you can keep your recovery gear and other items close at hand. As you can see in the image above, great care was taken to ensure the welds are on point. It’s just one example of the supreme care that the folks at So-Cal Teardrops take in building their trailers. So-Cal Teardrops hand builds each trailer they sell. Not only does that mean a fine attention to detail, but it also means that you can have your trailer customized to fit your specific needs.

The gentleman I mentioned earlier, Bob, told me that this was one of the primary reasons why he went with So-Cal Teardrops. The quality is off the charts, the trailer is made right there in the So-Cal Teardrops shop, and the XS11 trailer he got is long enough for him to sleep comfortably (he’s 6’3”). Like me, Bob and his wife visited the So-Cal Teardrops facility and were floored by the team’s dedication to making durable, functional trailers for their customers.

There’s a sense of pride that the So-Cal Teardrops employees have in their work – as they should! These trailers are beautifully built, and I have no doubt that Bob’s new XS11 trailer will serve him well on his journey to the arctic.

Of course, since these trailers are built by hand, So-Cal was able to give Bob the additions and upgrades he needed for his trip. Another addition Bob asked for was a full-length diamond plate rock guard around the entire bottom half of the trailer. This is an important feature given the roughness of the roads at the top of the world.

Bob also added a second AGM battery, a 100-watt solar panel, and an additional Anderson plug (plus a Jackery 1500 solar generator as a backup), as well as a self-supporting awning on each side of the trailer. There’s a wall system for the awning that can be placed on either side of the trailer. Having these awnings will give Bob shelter from the rainy season up north.

An Extreme Off Road Teardrop Trailer Should Be Easy to Tow I mentioned earlier that this trailer tips the scales at just 2,200 pounds. This featherlight weight is very important because you don’t want to drag a big, heavy trailer down the trail. Likewise, for the most extreme off roading situations, you don’t want a big full-size diesel truck to lumber along.

Instead, a small, lightweight 4×4 like the Ford Bronco might serve your purposes better. That’s what Bob went with, anyway! I asked Bob how he ended up with the 2021 Bronco Sasquatch, and he noted that he added Addictive Design Stealth Fighter bumpers to the front and back, added a few Baja lights, and mounted a Z-Roads rack with a ⅛” aluminum diamond plate to serve as a platform for a Roam Box 95L. Bob also added heavy-duty lockable mounts, two sets of Maxtrax mud boards, and four I-bolts that he can use as tie-downs if needed.

In addition to all that, there’s a 270-degree Overland Vehicle Systems batwing awning and an OEM platform in the back with a drawer system for additional storage.

Bob has a Dometic 55L fridge in a slide-out mounted on top of the platform, and there’s an array of Molle panels, too. A WeBoost system rounds out the rig’s upgrades.

So, not only does Bob have a fully-featured, easy-to-tow trailer, but he also has a killer Ford Bronco that’s up to the task of navigating some nasty terrain!

The People Behind the Trailer Matter I could go on and on all day about the quality of craftsmanship, the features, and the amenities that So-Cal Teardrops has put into the XS511 trailer. But that’s only part of the story.

What’s truly impressive about these trailers is the team of people that build them. As I said before, there’s a palpable sense of pride that these folks have in their work – well-deserved pride, too.

I’ve seen a lot of off road teardrop trailers over the years, and if I’m honest, most of them are just fine. There’s usually nothing that really jumps out at me as being truly fantastic.

But I have to say, my time at the So-Cal Teardrops facility was mostly spent with my jaw on the floor. The photos in this article simply do not do this trailer justice. It’s definitely one of those you-have-to-see-it-to-believe-it moments.

If an extreme off road adventure is on your radar, do yourself a favor and connect with So-Cal Teardrops to see what they can do for you. As Bob has discovered, this is the outfit that can best prepare you for your extreme travels!

What to Look for in an Off-Road Camper for Families