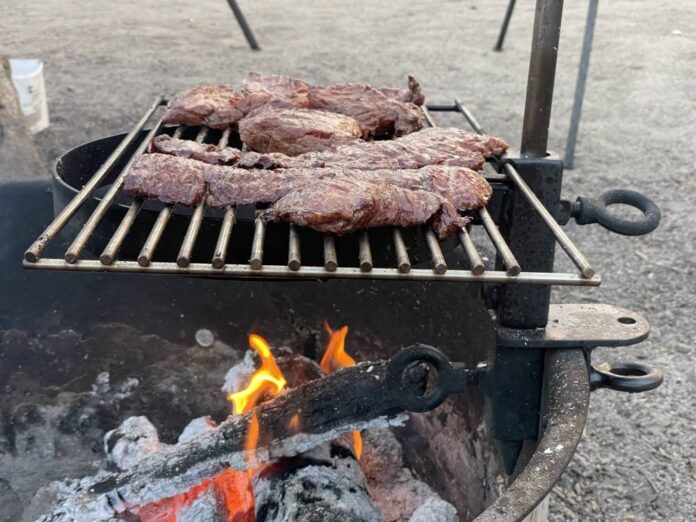 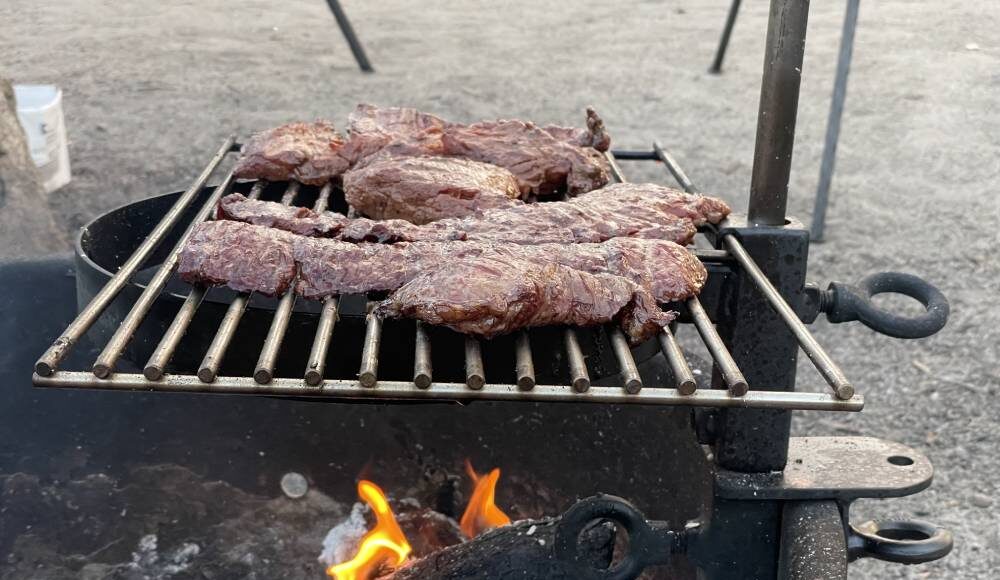 About a month ago, I posted my ultimate overlanding recipe for Kobe burgers and cast iron fries.

And in that recipe, I noted my cooking setup and the various implements I have for cooking while overlanding. One of those items is the Schenk, from JA Schenk Company.

Now that I’ve had the Schenk for a longer period of time and have had a chance to work more with it in the field, I thought it would be appropriate to do a quick review and share some of my experiences of using the Schenk for my overlanding cooking needs.

I like to think of the Schenk as a “tower of cooking utility.”

The entire apparatus is constructed from 306 food-grade stainless steel with 1/4-inch weld construction. Not only does this make the Schenk a rock-solid cooking implement, but it also ensures that it resists corrosion and gives you long-lasting durability.

The Schenk is multi-functional, so you can use the included grill as a cooking surface or you can cook in cast iron pots or pans – whatever you need! 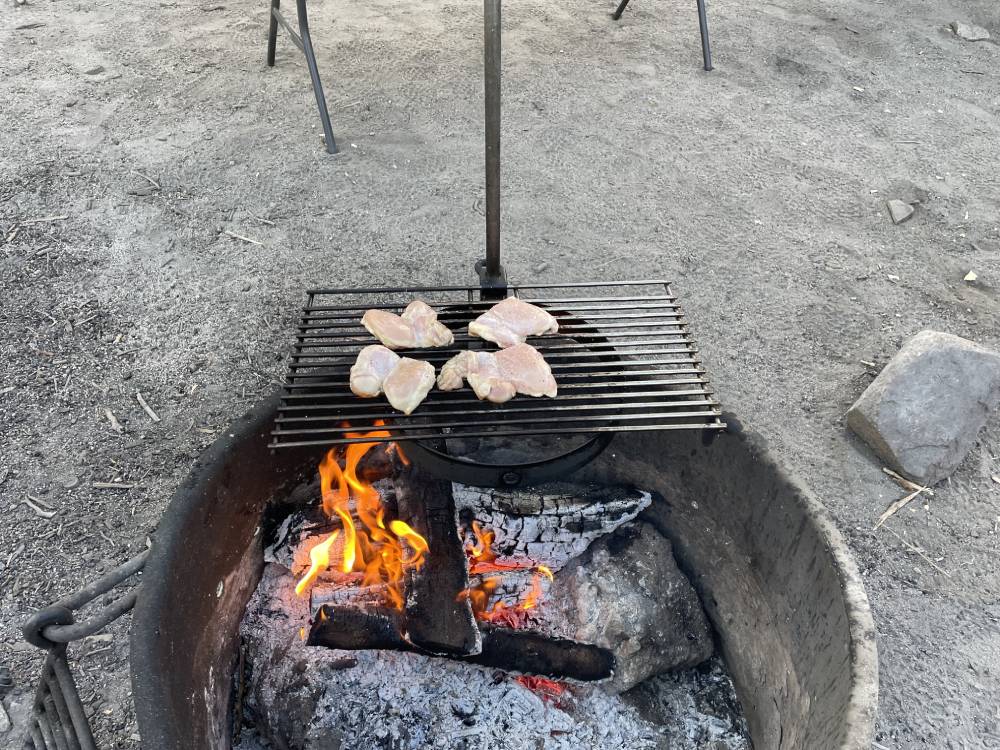 The vertical rod of the Schenk is fully adjustable, so you can lower it, add the grill, and grill up some steaks (or chicken, as shown above), or you can raise the rod to give yourself enough clearance above the fire to hang a cast iron pot for stew or hang your coffee pot to get your caffeine fix in the morning.

The point is that this is a highly versatile tool that enables you to cook various types of foods in various ways. It’s like an all-in-one overlanding cooking companion!

And you get all this utility in a small package. Here’s the technical specs of the Schenk:

So, as you can see, you get a lot of functionality in a tool that isn’t overly big or heavy. And when you’re overlanding and space is a premium, that’s precisely what you want – tools that are easy to use, easy to set up and take down, and that don’t take up a ton of space in your vehicle.

Using the Schenk at Big Bear 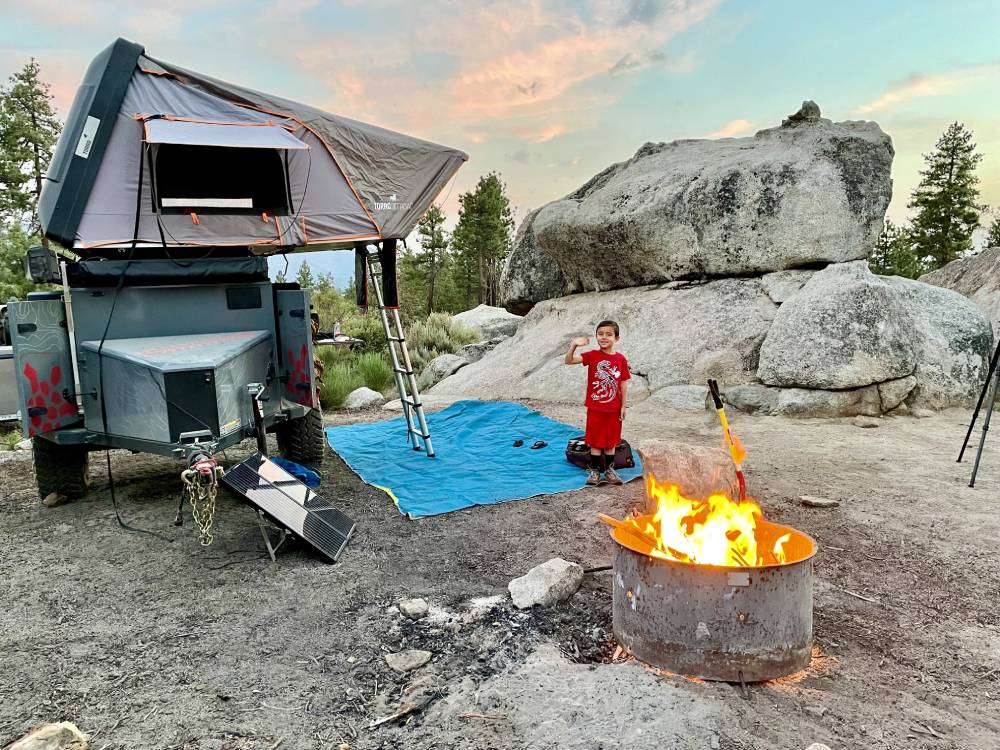 I was recently camping up at Big Bear, and I was able to use the Schenk quite a bit. A primary reason for this is because the Schenk has a bracket that allowed me to mount it on the fire ring in the campsite.

As you can see above, the fire ring is pretty robust. The Schenk’s bracket simply attaches to the fire ring so you can cook over the fire, as shown below. 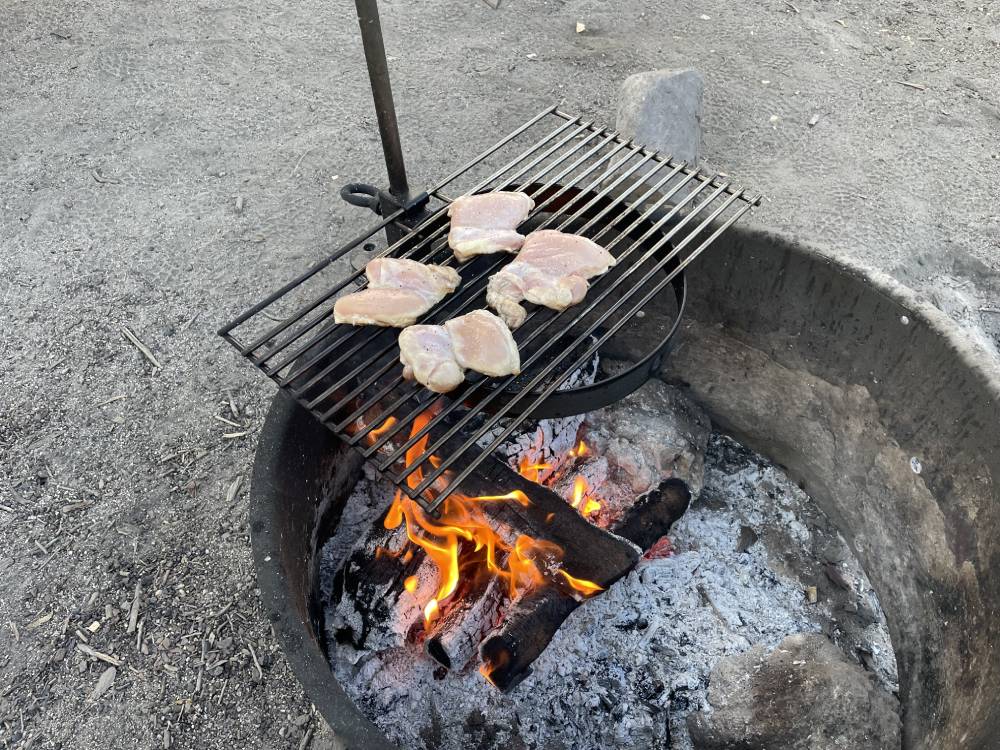 This is important because there are strict fire restrictions in place. The location I was camping restricted fires to the fire ring that was built and is provided by the campground. If I didn’t have this bracket for the Schenk, my ability to cook would have been much more limited. (As a side note, I also wanted to use my MC Ranch Overland Original Fire Reflector to help control the fire and reflect its heat and light back toward our camp chairs, but unfortunately the fire pit was too tall. It’s another one of those campfire items that I love to use when I can.)

So, anyway, thankfully the folks at JA Schenk had the forethought to have this bracket available, and that enabled me to cook up all kinds of food at Big Bear.

There were nights when we kept it simple – hot dogs and chicken, for example. And, of course, if you know me you know that I cooked up some bacon using the Schenk as well.

We also had some really kick-ass steaks… 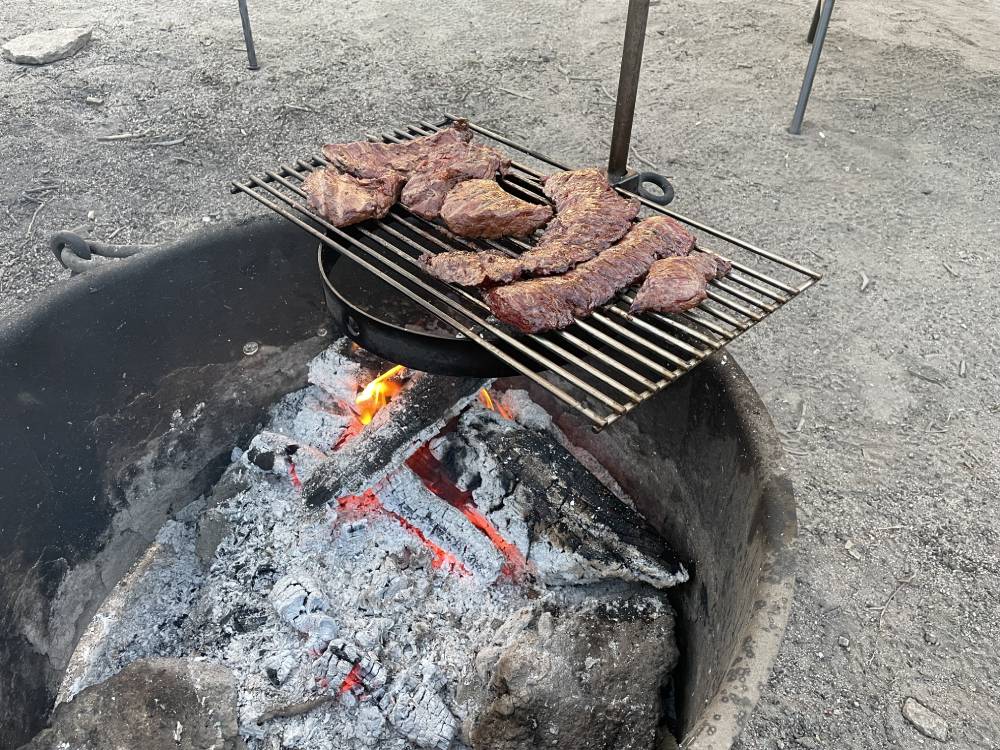 The steaks you see here are from the Butchery and included skirt steaks and Maple Bourbon Steak Tips. Both were absolutely insane cooked over a wood fire!

We added fresh chimichurri to them, too, which made them that much better. I seriously ate way too much that evening. It was just too good to stop myself! 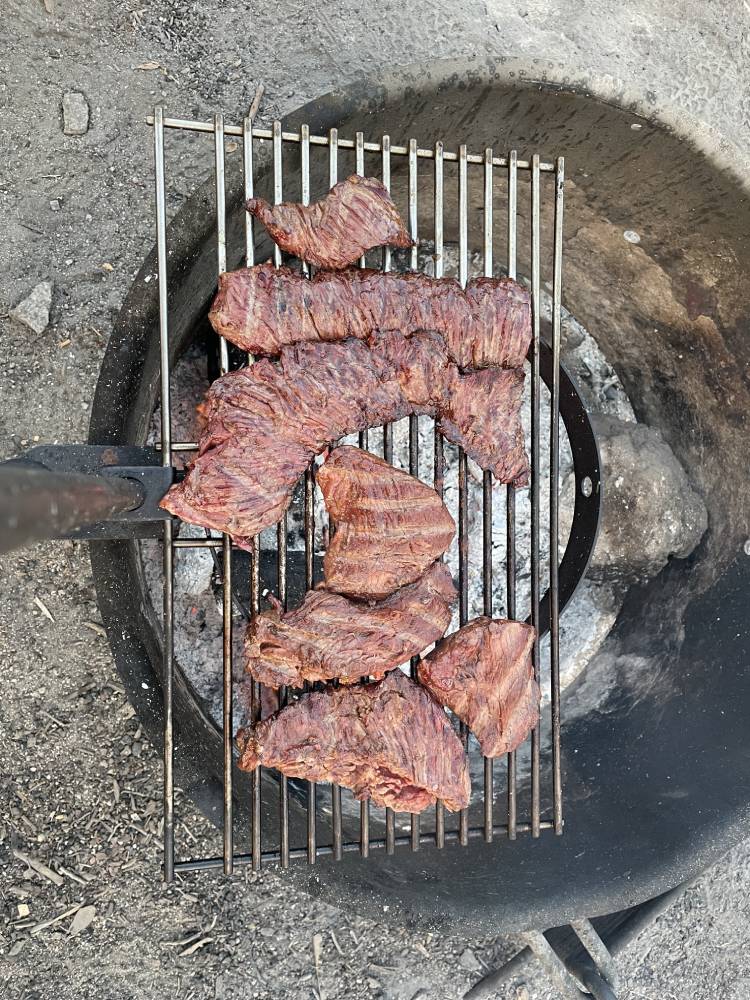 And as I noted earlier, getting that wonderful smoky taste is super easy. It literally takes a few moments to set up the Schenk, and then once the fire is going, I can switch between the grill, a pot, or a pan to whip up my meals.

Tear down is equally as simple. Once it’s cooled off, it’s a simple matter of deconstructing the Schenk and putting it in its beautiful Wannigan box. Again, it takes just a few moments to get cleaned up and stored away.

The Schenk Review: Better Than the Skottle?

You might remember that just a few weeks ago I published an article about the Skottle grill. In that article, I proclaimed that it was my favorite overlanding accessory.

Now, I’m not trying to backtrack on that statement. The Skottle is a fantastic culinary tool to have when you’re overlanding.

However, now that I’ve had the chance to use the Schenk on multiple occasions, I have to say that it might be right there on the same level as the Skottle in terms of my favorite overlanding accessory. It’s just so functional and easy to use, and it really gives me the versatility I want for making different types of meals.

If you’re a culinary connoisseur like I am, you need one of these bad boys. It’s such a great investment – and one that will pay dividends over and over again for years to come!