A Quick History of the International Scout 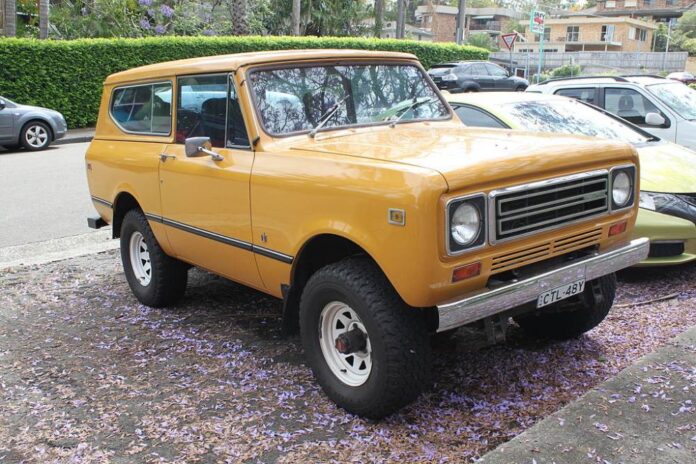 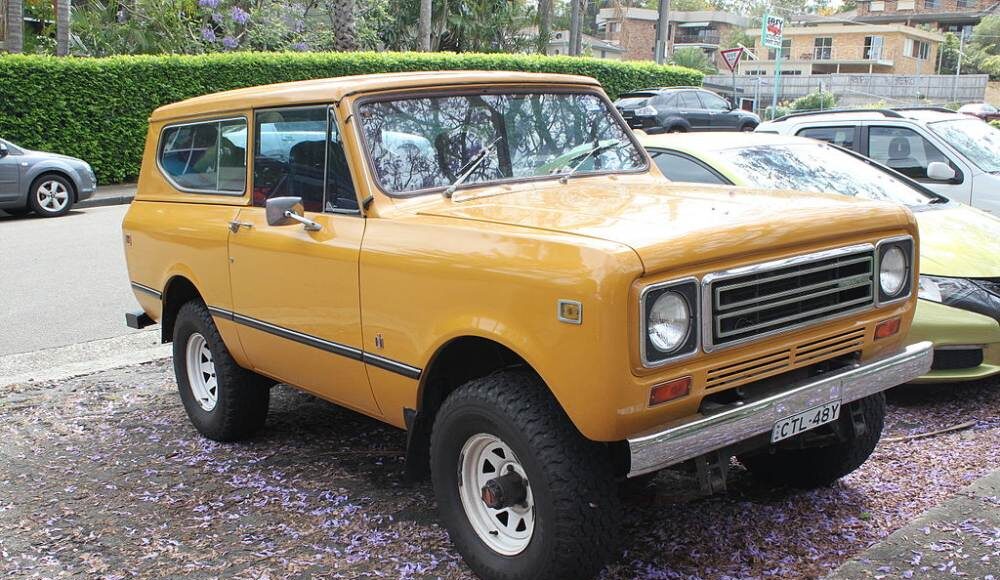 Jeremy from Sydney, Australia, CC BY 2.0 via Wikimedia Commons

In every story about the beginning of off-road vehicle popularity on US soil, Jeep CJ-5 and Ford Bronco get all the credits. However, in those early years of the SUV segment, when SUVs were really (outdoor) sport utility vehicles, there was one more important member of the crew, which, sadly, never lived long enough to see SUVs class dominance. Maybe you guessed which legendary off-roader we are talking about. Yes, the 4×4 in question is the 1961 to 1980 International Scout.

Introduced before the Bronco or Blazer, Scout was Jeep`s first real archenemy. Presented in 1961, Scout was very advanced in design and engineering and was much matured and usable than the CJ-5. Over the years, it became synonymous with the small off-roader class and even managed to be pretty popular and respected in export markets. It was ahead of its time, and we often wonder if the car industry would be different if the Scout stayed around a bit longer.

The Origin of the International Scout 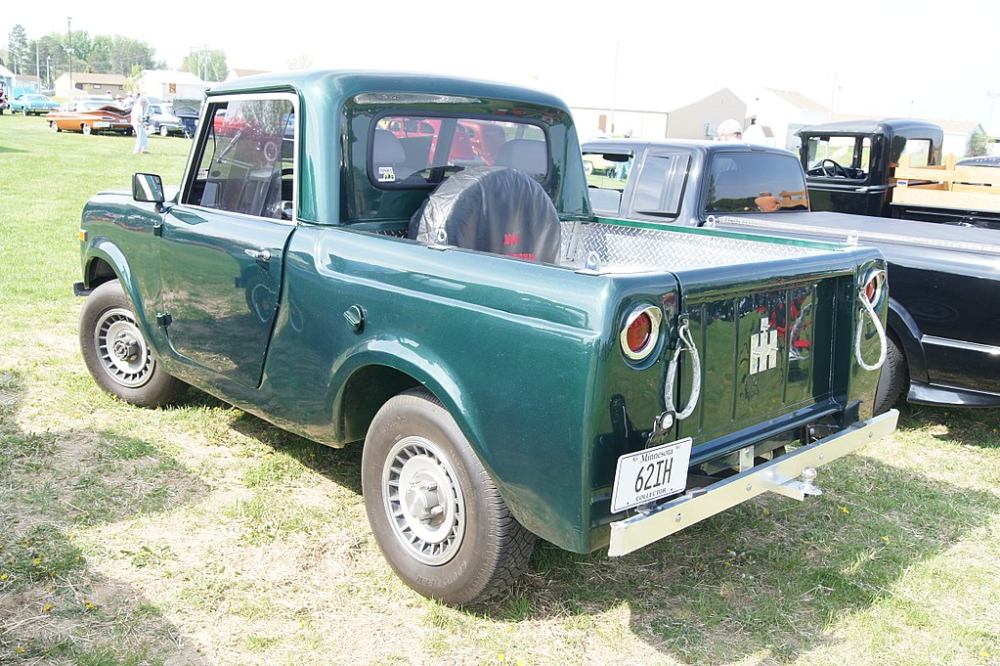 Greg Gjerdingen from Willmar, USA, CC BY 2.0 via Wikimedia Commons

Most of you will recognize the company name, and International Harvester had been a significant player in the truck industry since 1907. However, in the early `50s, the International introduced a competitor to Chevrolet Suburban in the form of Travelall and then a full-size pickup with the same mechanics. After significant success, International was considering moving further into the passenger car market, but they needed a sellable product.

The solution was found in a small, all-terrain, fun vehicle called Scout. Presented in 1961, Scout was about the same size as the Jeep CJ-5 but featured a more modern, boxy design, a wide range of engines, from four to six-cylinder, and even a V8 option. It was affordable, dependable, and well-built and showed that 4×4 vehicles are not only meant for working or military service but can be used for fun camping weekends and trips to the beach.

When the Scout was first shown to the public, only one version was available called Scout 80. It was a small pickup truck with a removable glass fiber roof and a small truck bed behind the front seats. The base engine was a little, 2.5-liter four-cylinder and standard four-wheel-drive. 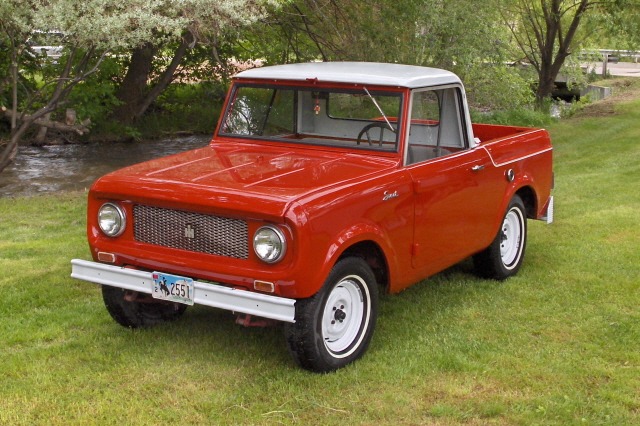 Scout 80 was produced until 1965, and it was a pretty basic model with no luxury features, simple mechanics, and even a fold-down windshield. However, in 1965, due to market demand, International introduced Scout 800. This was an improved model in every way and featured more options, a choice of straight-six and V8 engine, better trim designs, and optional rear seats. If the Scout 80 was a workhorse model, the Scout 800 was much closer to what we now consider an SUV or lifestyle off-roader.

Besides the standard four-cylinder with 93 hp, optional six-cylinder with 120 hp, and two V8s, International offered a very interesting engine option from 1965 to 1968. It was the turbocharged four-cylinder “Comanche” engine with 111 hp. The four-cylinder was equipped with forced induction for slightly better performance and fuel consumption based on the standard unit. Not many were built, and it is overshadowed by much more powerful V8 units. Still, it is an immensely exciting option which shows how foreseeing the International engineers were back in the day. 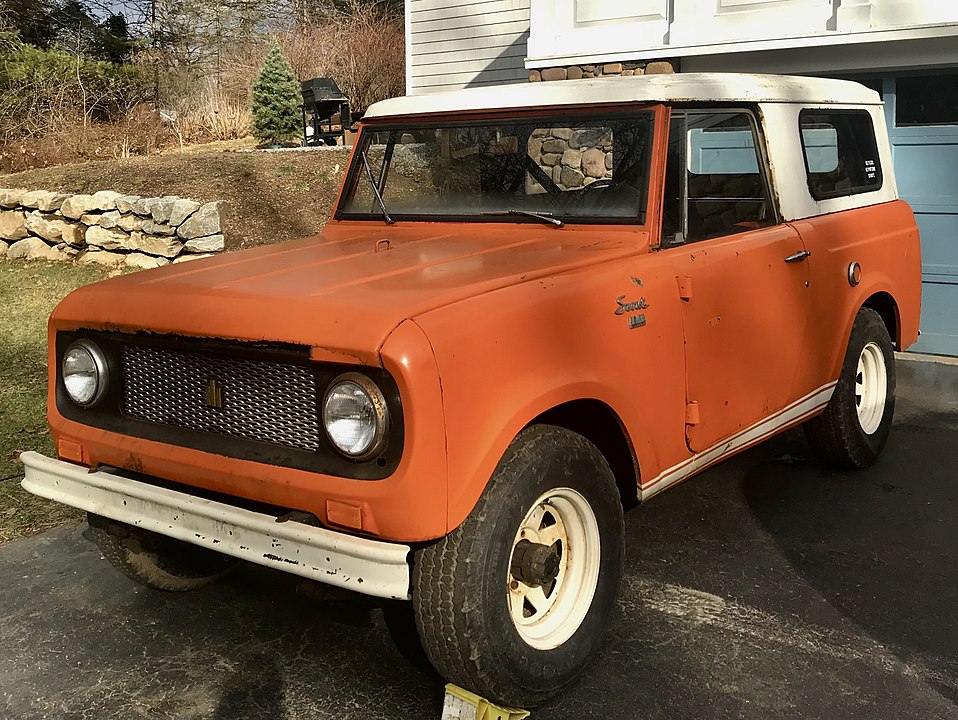 The 800 A and 800 B models were built between 1968 and 1971 and marked the first-gen Scout end. Again, those were slightly improved versions of the original design with more equipment and even some unique trim packages.

The 1971 model year saw the release of all-new and more advanced Scout II. By the early `70s, Scout was not fighting just the Jeep models, but also Ford Bronco, Chevrolet Blazer, Dodge Ramcharger, and Plymouth Trailduster, not to forget the Toyota Land Cruiser FJ40. So, the SUV market was established, and Scout was one of the key players. 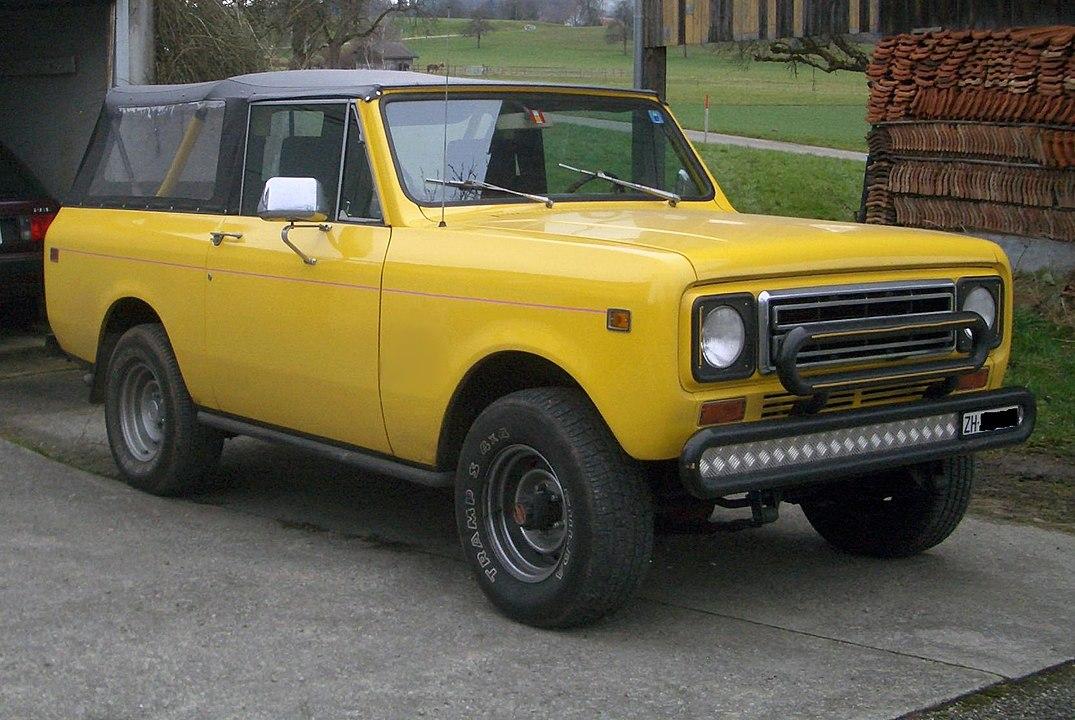 The engine options were more or less the same, and the range started with a 196 cubic-inch four-cylinder, followed by two six-cylinders (232 and 258 cubic-inch) and two V8s (304 and 345 cubic-inch). Interestingly, the International offered two diesel options in the late `70s, and Scout II used Nissan-made 3.3-liter diesel six-cylinder engines with or without the turbocharger. Diesel-powered Scouts were popular in export markets outside the USA.

Seeing that the SUV market is moving towards bigger and more luxurious models, International introduced the Terra and Traveler models. Those upscale versions of the Scouts II were offered from 1976 to 1980 and featured stretched body for more interior room, luxury trim, and a full-length fiberglass roof with a third-door hatch in the back. 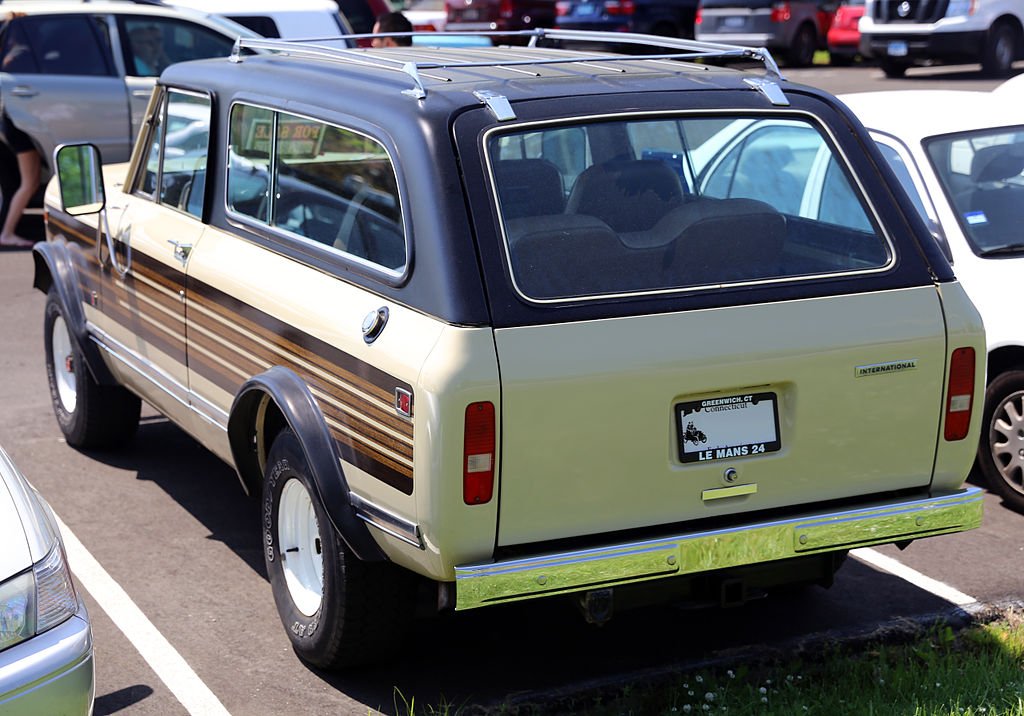 At the same time, International didn’t forget about the hard-core off-road market and presented the stripped-down version called SS II (Super Scout II). It was a direct Jeep CJ-5 competitor with removable plastic inserts that mimicked the doors, roll-bar, revised suspension, wing mirrors, and plastic grille, and so on. It was pretty basic but extremely capable on the trail. 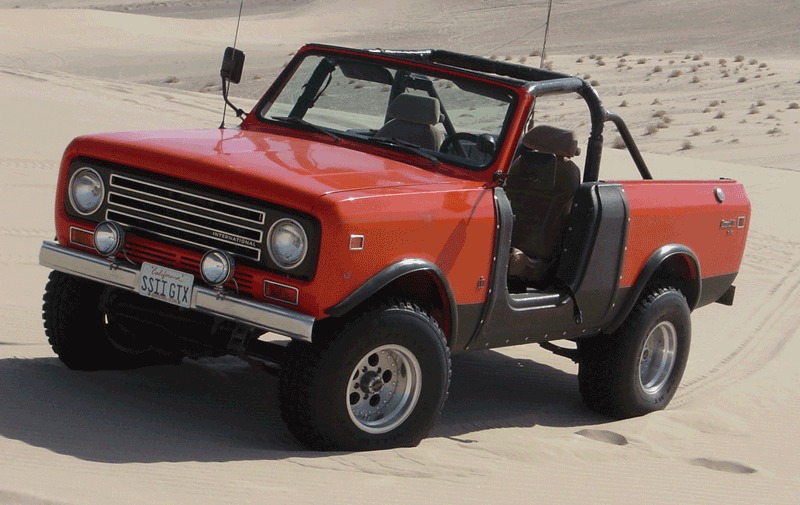 ScoutZilla, CC BY 1.0 via Wikimedia Commons

A very interesting part of the Scout legend is Monteverdi Safari, built from 1977 to 1982. If you don’t know what Monteverdi is, we cannot blame you. It is an obscure Swiss luxury-car manufacturer active during the `70s. 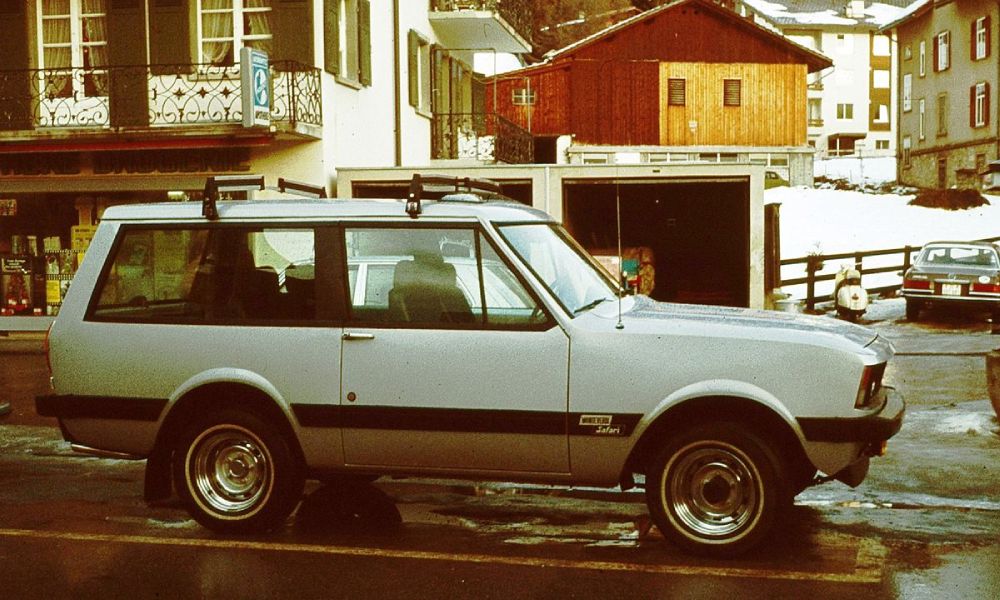 Peter Monteverdi, the owner, realized that he needed an upscale SUV to compete with Range Rover, so he bought a number of Scouts and turned them into Monteverdi Safaris or Saharas. The Safari featured V8 engines and totally revised interior and exterior, but Saharas were lower trim and still looked like Scouts. Monteverdi installed every luxury item and even had Chrysler`s V8 option for most discriminating buyers.

Of course, not many were built, but this just shows that Scout`s appeal was really global.