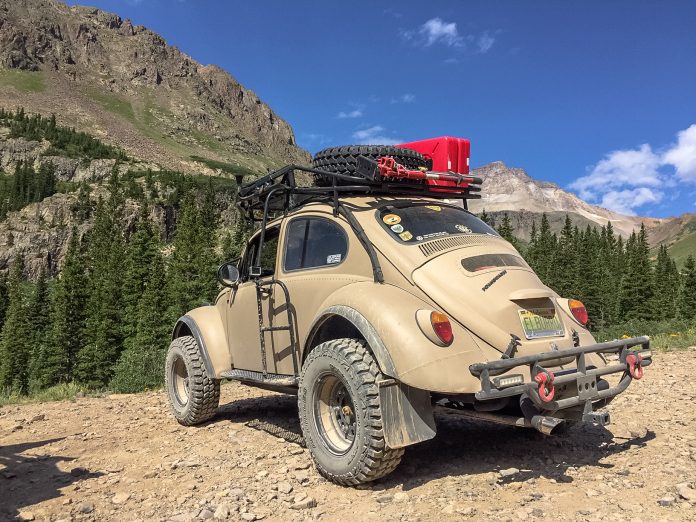 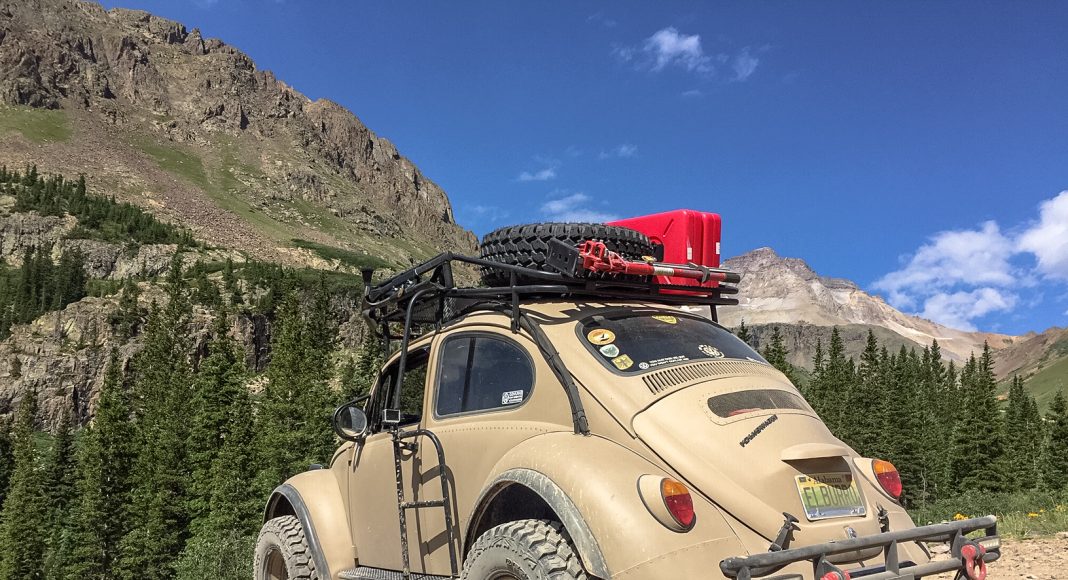 One way to grab my attention is to show me anything with some big mud tires under it. You can bet I’ll be interested! That’s exactly what happened when I saw the cleanest overland Bug build I have ever seen.

This one is a creation of Jamie Wiseman, owner of TVR Automotive in Tuscaloosa, Alabama. No, it’s not the English sports car company – it couldn’t be, those have crater-like panel gaps and attention to detail is on par with that of a five-year-old’s.

Jamie’s creation is different, you can tell that time and effort has gone into the beautifully fabricated accessories (which we will get to later on). Everything is there to make the little bug a capable and reliable machine that also happens to look badass.

How Can a Humble VW Bug Tackle the Harshest of Terrains? 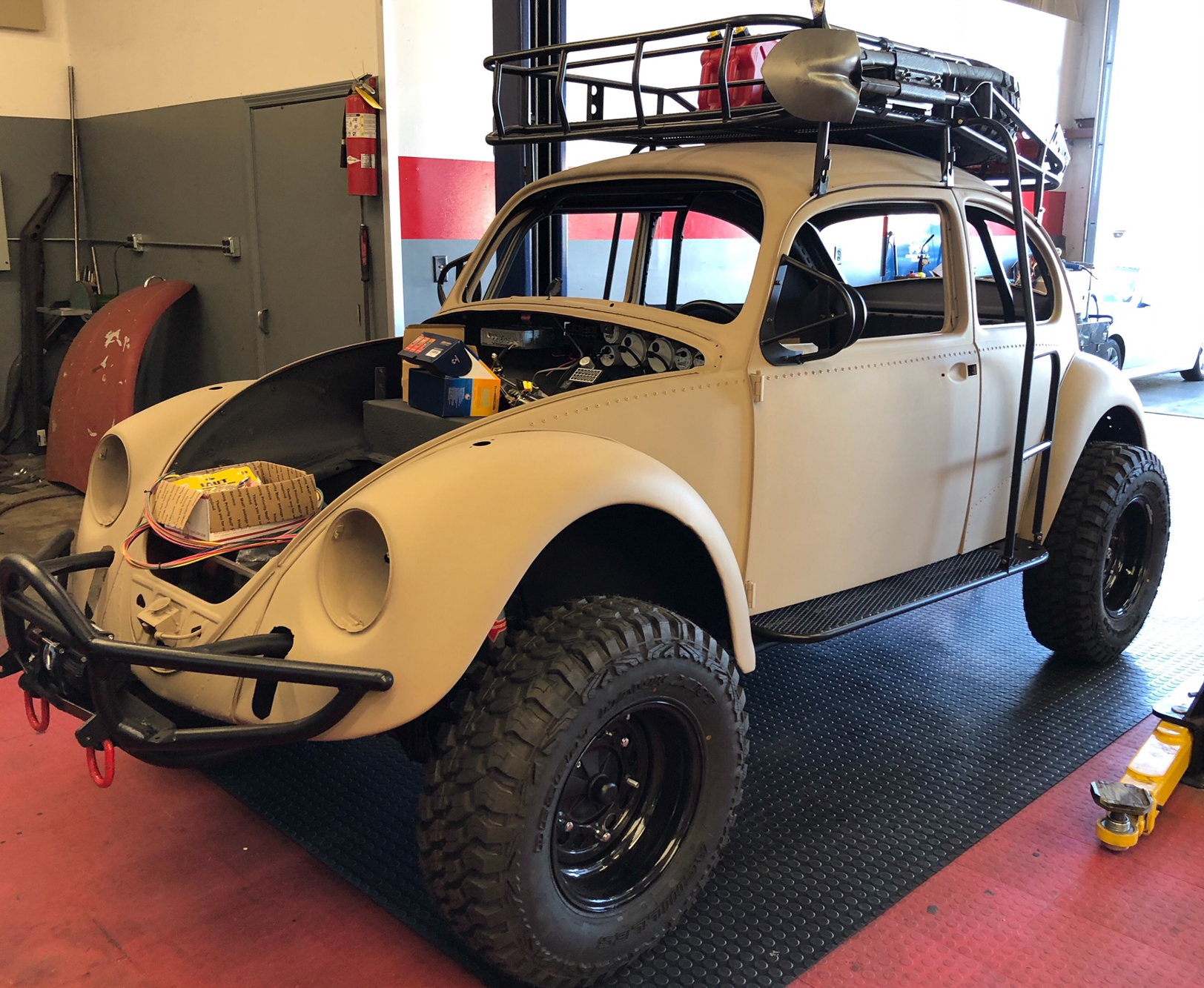 Simple vehicles are reliable, and the Bug might well be the definition of simplicity. However, when overlanding reliability isn’t the only factor. A vehicle needs to be comfortable and capable as well – basically, the exact opposite of what a VW Bug is. Knowledge and skill can solve any issue though, and that’s what Jamie did.

Let’s start from the obvious, those beefy tubular bumpers. No, they are not mounted to the weak 50-year-old body – but to the roll cage that ties into the front beam and the back torsion housing. A 4,500-pound winch is housed in the front bar and you can’t buy any of this stuff for your own Bug. Everything has been fabricated specifically for this vehicle.

The car is wider by three inches and an additional three inches of lift is achieved thanks to custom-made lift spindles. Everything has been beefed up to cope with the harsh terrain this thing will be driven on. The tie rods have been upgraded to heavy-duty ones and it even has an electric power steering system from a UTV.

While still 2WD the little overland Bug has some tricks up its sleeve. A transaxle and a gear reduction box from a 1967 VW Bus give it a much better gear ratio when the going gets tough. Another cool addition is the cutting brake – what is this? Well, when the open diff sends power to the wheel with least resistance the cutting brake can be pushed to brake just that one wheel; therefore, sending power to the other wheel that has grip. 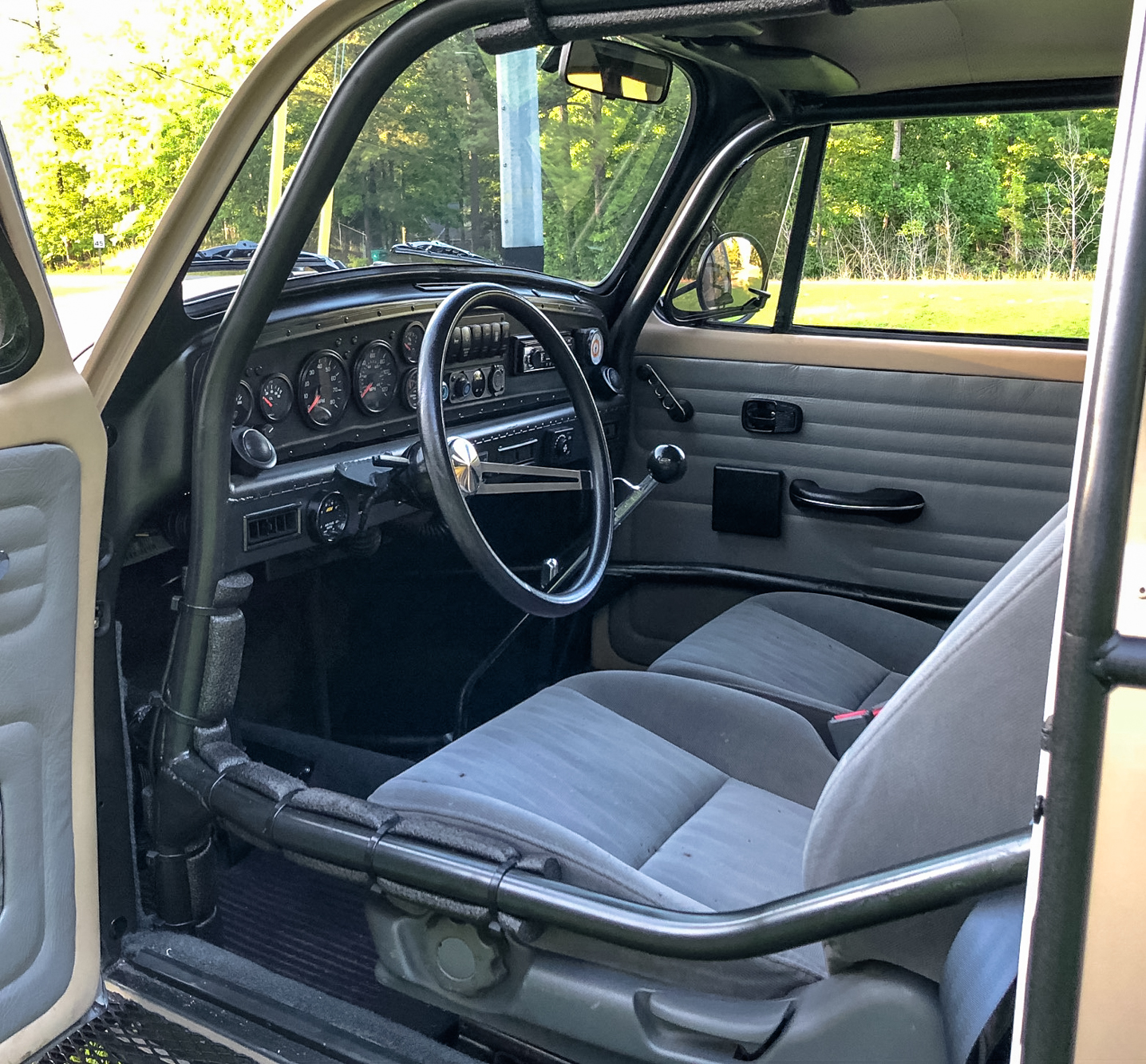 The roof rack is also custom made – on it you will find jerry cans, a full-size spare, lights and strangely – an oil cooler. You see, this bug is now 1000 pounds heavier than stock and all 140HP need to be kept cool. 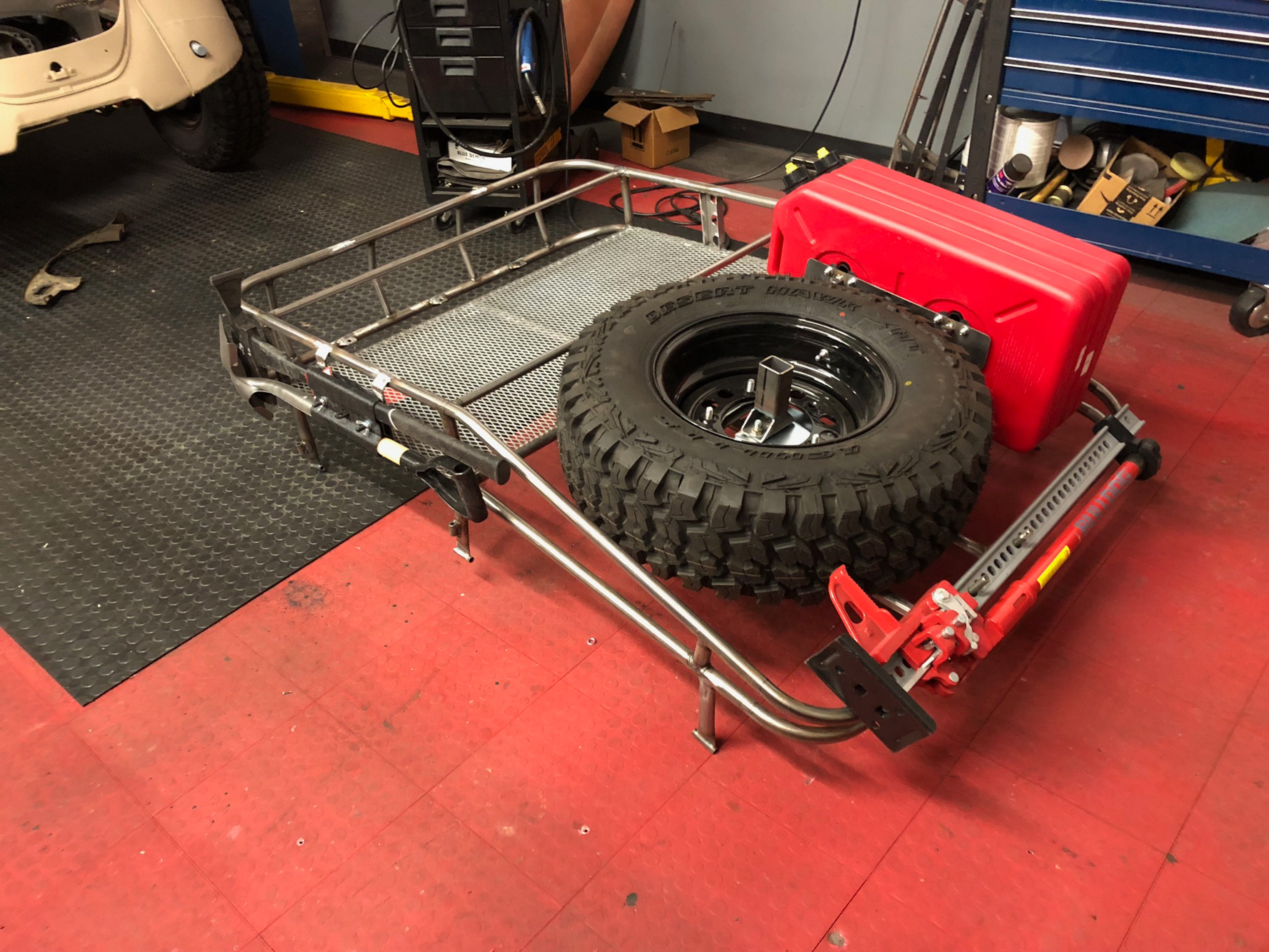 140HP from a VW Bug? Yes, that’s possible. The engine is now 2110cc with CB performance heads and a Holley fuel injection system that feeds it with the fuel it needs. Everything is protected from underneath with steel skid plates and It even has AC out of a Subaru! Therefore, overlanding in the hottest parts of the country won’t be an issue.

What About the Interior in This Overland Bug? 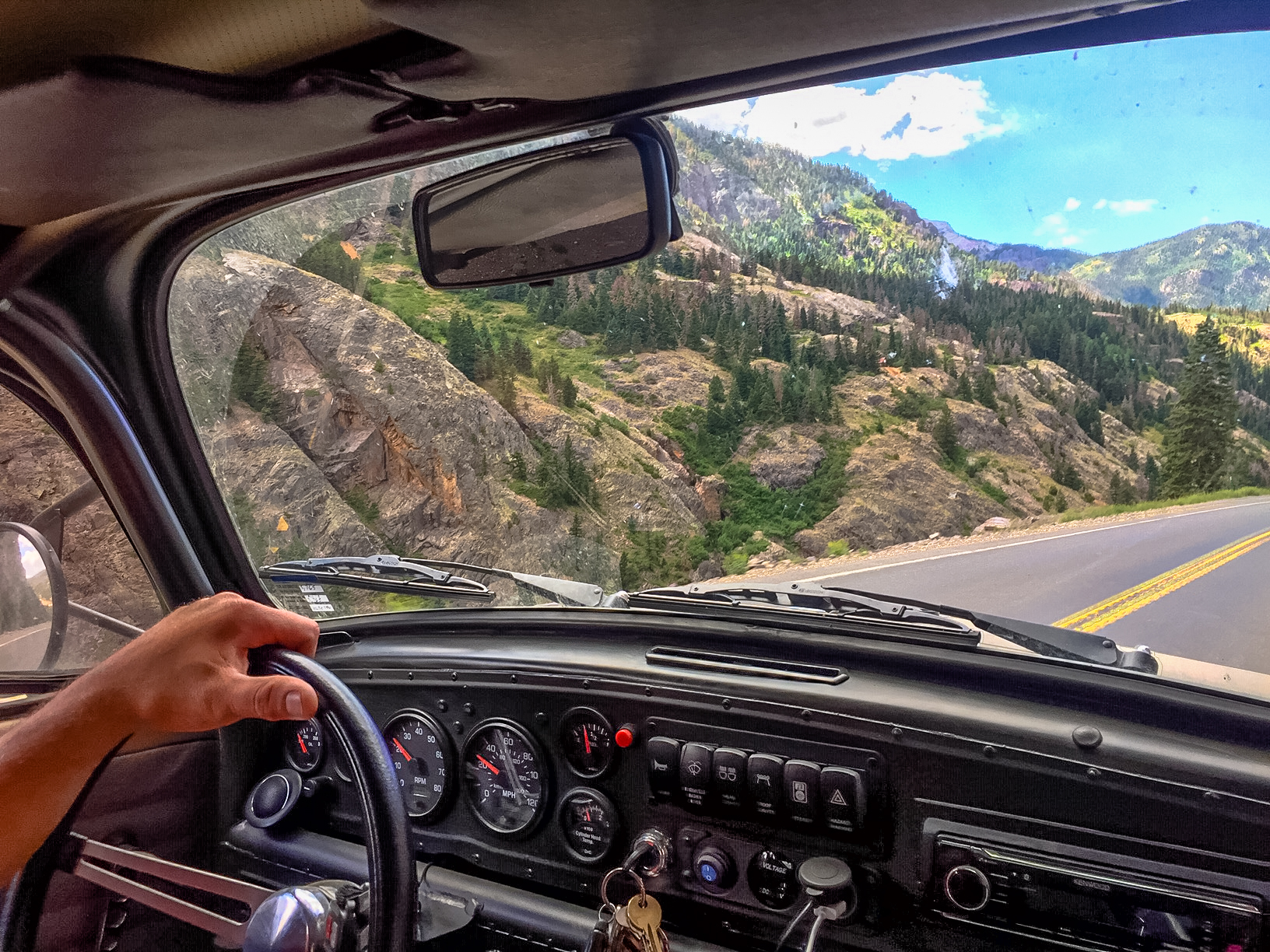 If you’ve ever been in a VW Bug you will know that the interior is spartan – to say the least. Not with this one…

A sound system, seats from a Honda Civic and even sound deadening make this a far more enjoyable drive over long distances. The dash is simple, yet functional and beautiful. Gauges for cylinder head temp, oil temp and oil pressure are all mounted in the dash. Jamie wanted to be able to monitor everything on long trips.

The rear seats have been removed and the space is now used for storage. Although not much, it will be perfectly suitable for the two people it can seat. 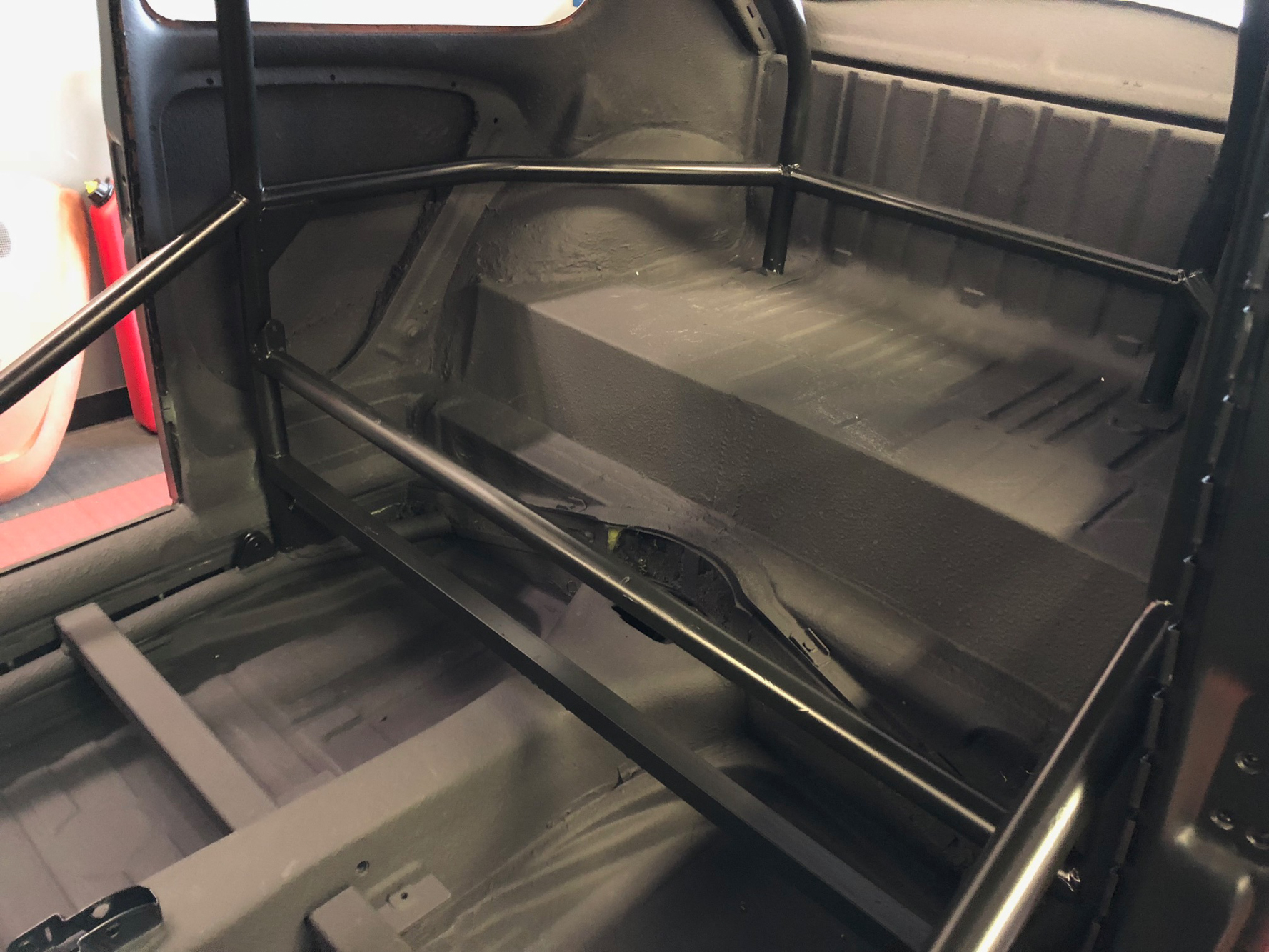 Amazingly, this overland Bug was completed in just 9 months. I say amazingly because most project cars take ages to get to a stage where they can be reliable. It even has a camper trailer in tow to make living out of it even more enjoyable!

Imagine driving up a steep mountain road and seeing a VW Bug overtake you while on 30-inch mud tires and towing a trailer! I would have to pinch myself.

Jamie hasn’t just modified a VW Bug here, he has turned it into a reliable, functional and damn cool tourer. You can be sure you won’t find anyone with the same car as yours on the trail with this one!

What do you think? Do you dig Jamie’s wild overland Bug creation?

Share
Facebook
Twitter
Previous article
Buyer’s Guide: Choosing a Roof Rack or Bed Rack for Overlanding
Next article
20 Camping Hacks That Will Make Your Next Trip Even Better